The viral Facebook Common Core math problem posted by an angry father is no more. The background story is much deeper, and that dad? He now supports Common Core.

How could anything turn around like this? I've fine-tuned the story to the essentials. So much for the phony outrage. Edweek.

How it all started: 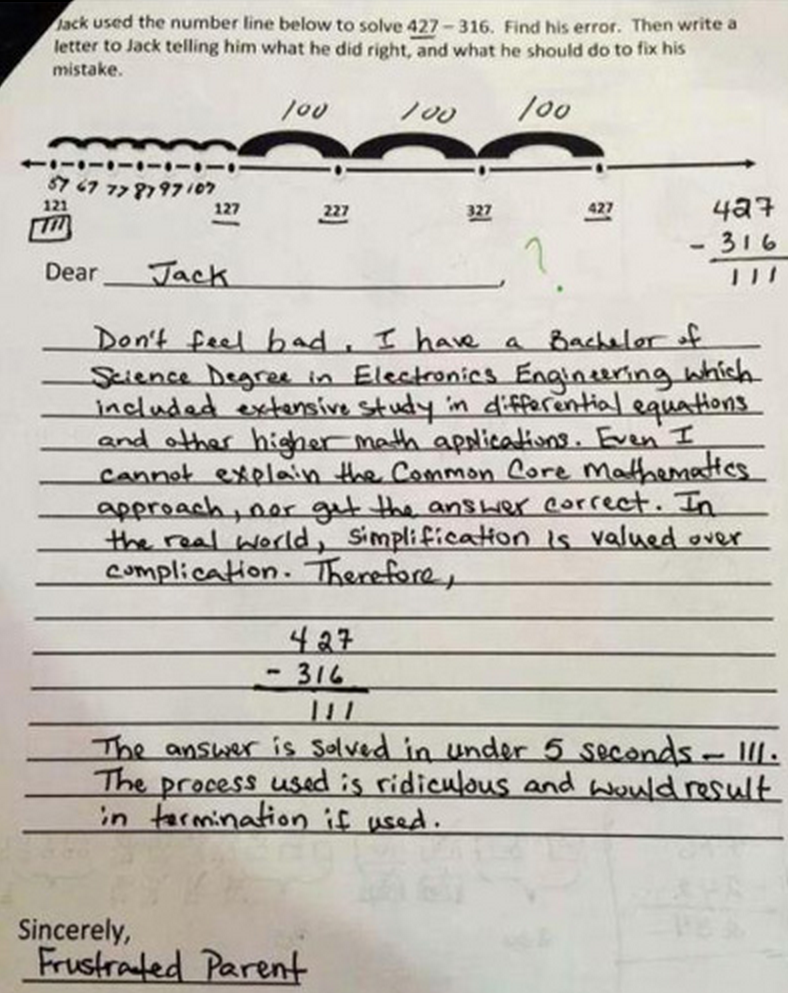 After a long and frustrating homework session with his 2nd grade son one day last school year, Jeff Severt dashed off a letter to the teacher. "I have a bachelor of science degree in electrical engineering. ... Even I cannot explain the common-core mathematics approach, nor get the answer correct."

A word problem about a fictional student named Jack had put Mr. Severt, of Cary, N.C., over the edge. Mr. Severt's wife snapped a picture of the "common core" math problem and the note to the teacher, and put them on Facebook. The post went viral.

The response from the lead writers of the common standards for math was perhaps the most interesting: The problem wasn't part of the common core, said mathematicians William G. McCallum and Jason Zimba. It was simply the product of a badly written curriculum.  The common standards for math differ from most previous state standards in significant ways. They are fewer in number, connect more broadly across grade levels, and emphasize conceptual understanding along with the procedural skills that schools have traditionally taught.
...what some see as critical misunderstandings about the common core—perhaps the most fundamental and widespread of which is that the standards are a "curriculum." The standards are intended to be benchmarks for what students should know and be able to do. Curriculum, on the other hand, "is the 'stuff' of learning, the content of what is taught in school—especially as embodied in the materials used in instruction."

Here’s the most interesting point #2 about the whole controversy:

Mr. Severt, of Facebook renown, eventually replied to the barrage of comments on his son's math problem. He explained that his son, who has autism spectrum disorder, "knew the math answer immediately in his head. But this problem required a narrative answer utilizing a number line. While he knew the math, he balked at the answer being a writing assignment—his greatest anxiety." Mr. Severt decried the focus on "next-level critical thinking" over basic operations with such young students. At the same time, he defended the assignment to a point, calling it "creatively valid."