Walker's Scheme to Sabotage ObamaCare and raise rates on Wisconsinites!

2. Insurance Premium Hell: Walker’s intentional effort to prove ObamaCare is a massive failure by helping push health insurance rates even higher is your average individual $251 a year, and your cash strapped family $1,017 a year through an employer.

3. Taxpayers Lose: Walker’s tax cuts are insignificant, and pass directly from us to our health insurers through higher premiums, and then some.

Citizen Action of Wisconsin has been analyzing the numbers since the beginning of the ACA, comparing Wisconsin with Minnesota. The Affordable Care Act isn't just about people and families getting a good deal on the exchanges, but it also gives the states the ability to review insurance premiums and negotiate them downward.

And Walker won’t do that, intentionally. This is one way Walker can prove the ACA is responsible for forcing rates to skyrocket, even though it’s his own fault.
SHOP is Coming: SHOP stands for “Small Business Health Options Program,” and even before it begins, Walker has made sure the businesses that are the backbone of our state’s recovery is hammered by high exchange rates.

Wisconsin (has) tried to undermine the health law. The state commissioner here has not provided a robust review of rates, rejecting those that are too high. The ACA tasks state regulators with reviewing health insurance premium rate increases of over 10% and making a public determination of whether such increases are justified by actual medical costs, finding those that are not justified excessive. As revealed by previous research, the Wisconsin Office of the Insurance Commissioner (OCI) has yet to find any health insurance rate increase excessive. Wisconsin also has the statutory authority to challenge rates which are not justified, but the Walker Administration's OCI has yet to use this authority.

That alone is evidence of Walker’s scheme. Now let’s compare: 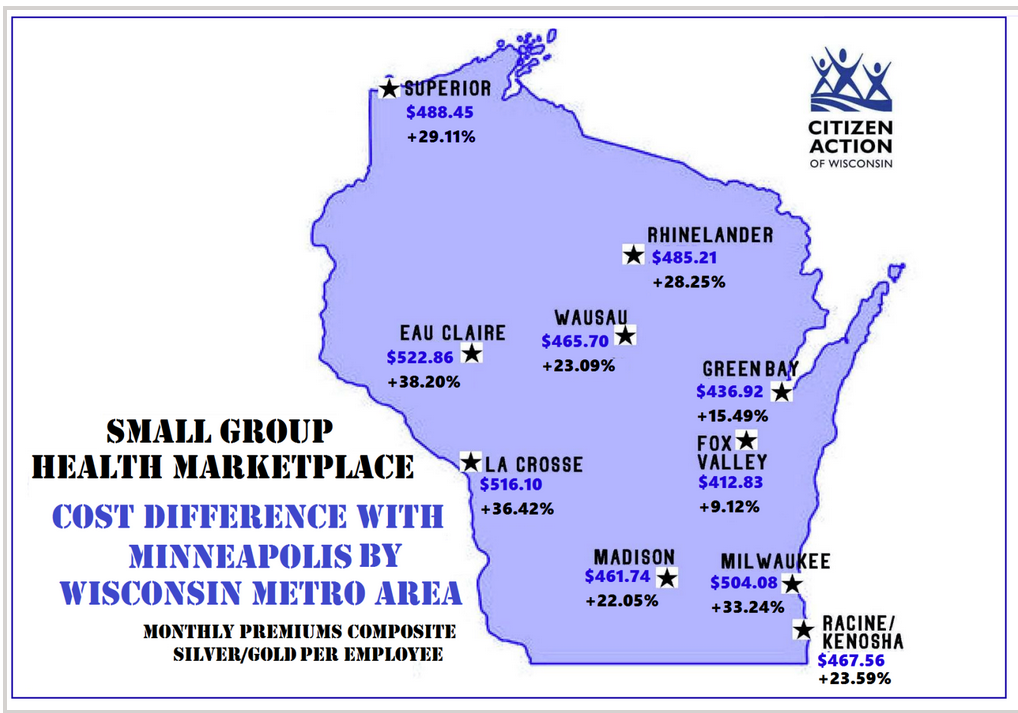 Minnesota has used a robust rate review process to lower health insurance premiums. According to the Minnesota Department of Commerce, rate review played a major role in moderating rates, reducing originally filed rates from 4‐37%. It is possible that this understates the impact of such rigorous rate review, as insurers may have submitted lower rates in the first place knowing they would face strict regulatory scrutiny.

Increasing the number of people without health coverage increases uncompensated care, shifting costs onto private health insurance plans. Insurance companies in turn price premiums based on the projected impact of such cost shifting … denial of BadgerCare to an estimated 87,000 residents … has substantial impact on premiums. A report by Small Business Majority found that accepting federal Medicaid funds would contribute to ending the practice of cost shifting of health care premiums now paid by employers to cover the uncompensated costs. The report found this uncompensated care cost to total over $1,017 per year for a family plan.

This report finds that Wisconsin participants on the health insurance marketplace will be paying (before tax credits) premiums of over $675.48 more per year for each employee for a single Silver policy than their counterparts in Minnesota. States which make health coverage more affordable for small businesses will also generate greater economic opportunity than those which do not. The startling numbers in this report make a strong case that policymakers in Madison should put their ideological differences aside, and work cooperatively to secure the full benefit of national health care reform in Wisconsin.