Holy cow, Scott Walker wants to help the wealthy get all of us to pay for their kid’s private school.

This ought to go over well with voters in many of Wisconsin's great school districts. It's also an unexpected but welcome gift to Mary Burke from the Walker campaign, especially after recent research and testing have shown how voucher schools came in at or below public schools scores on math and reading.

But why let actual result get in the way of ideology: 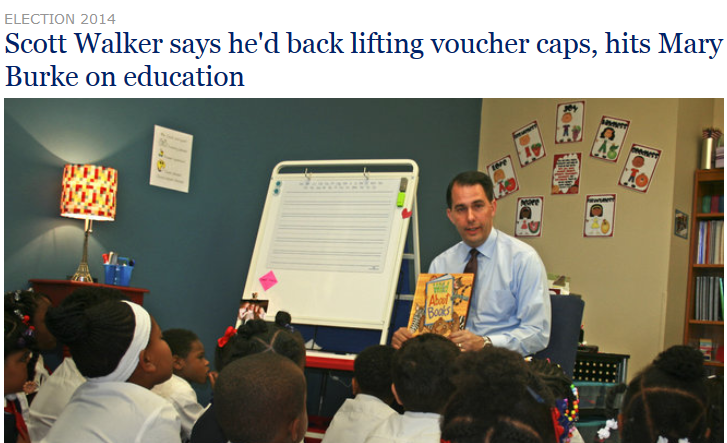 jsonline: Walker said if he's re-elected, he would support a significant or wholesale lifting of the enrollment cap on the 2-year-old statewide private school voucher program, particularly for low-income students but also potentially for students from families with higher incomes.

Suggesting that Act 10 has been an amazing success, instead of  the slow disaster we’re seeing first in rural schools, is insane. The Walker campaign is trying to vilify Mary Burke for her public service on the Madison School Board, while trying to make people forget he cut school funding more than every other state except one:

Walker said his opponent in the gubernatorial race, Mary Burke, sits on the school board of the Madison Metropolitan School District that will be the only school district in the state next year not adhering to the Act 10 law next school year.

Walker has received political and campaign support from backers of school choice. Walker said Burke is getting support from teachers unions in the form of political advertisements.  "That, at least to some, might appear to be why she's been reluctant to take on the teachers unions when it comes to options like (Act 10)," he said.

Walker is desperate of course, actually making it seem like Burke should “take on the teachers unions,” like the very concerned voucher privateers are pushing. Acting like the Democrats are against Act 10 is as surreal as Walker's empty campaign will get. It's clear, Walker never notice the Act 10 protests. So much for being a servant of the people.

Also check out Jake's TA Economic Funhouse for a detailed account of how much money the state would have to come up with to pay for expansion...$710 million? That's how it's shaping up.
Posted by John Peterson, Democurmudgeon at 9/03/2014 05:27:00 PM