We always knew that when it came to cutting school budgets, conservative freeloaders would never be satisfied. As long as I can remember, Republicans have always complained about supposed bloated school administrations. In the 90's we were already talking about cutting everything down to the bone. 20 years later, the rhetoric hasn't changed.

Check out this recent retweet by Walker's Borg-like trolls, whose loyalty to party leader Scott Walker knows no bounds. It epitomizes their now mindless habit.

To them, it's not Act 10's disappearing one time benefits contributing to school district shortfalls, it's the districts irresponsible spending on things like keeping the lights on and class sizes down, blah, blah, blah. See the comment at the bottom by Tom O'C: 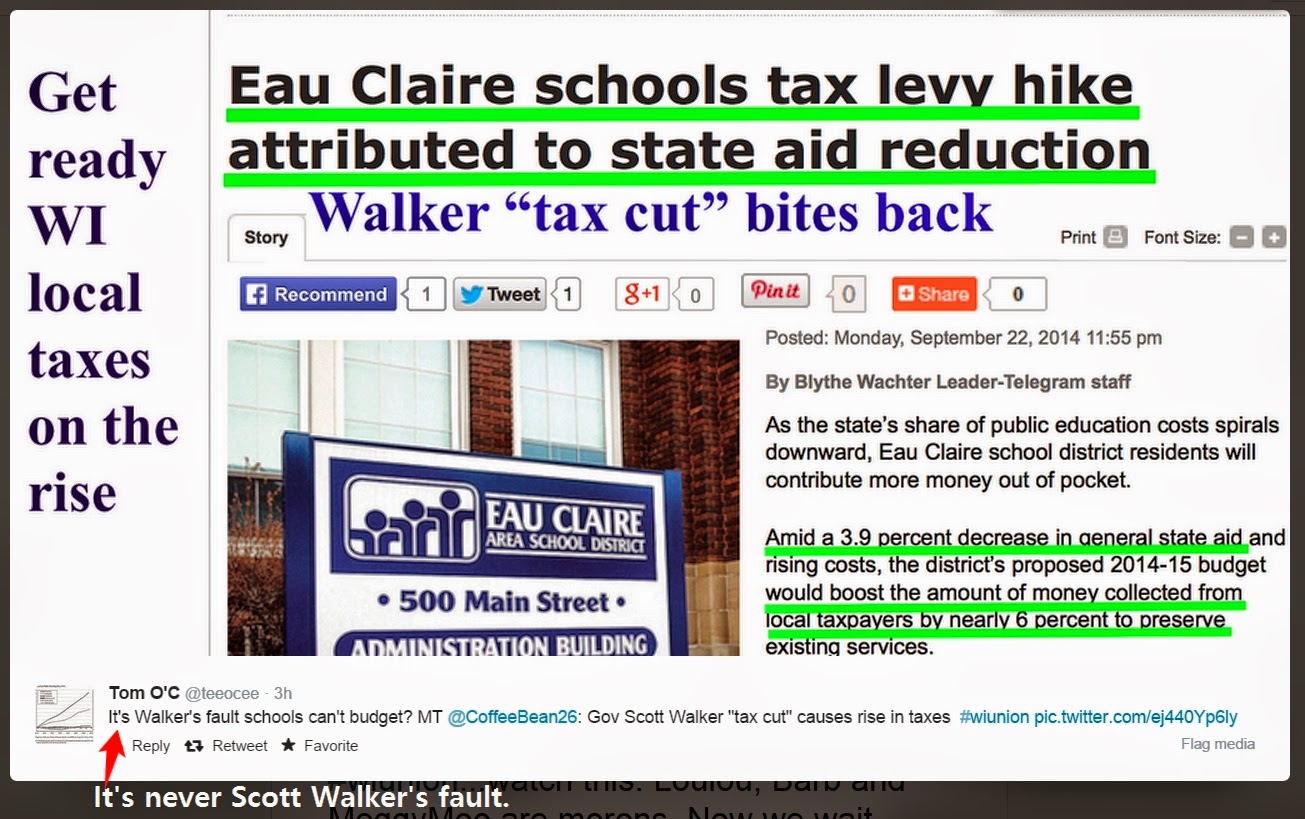 It’s a funny thing about Scott Walker’s much touted tax cuts; they’re negated by the state’s cost shift to local governments. “Stand with Walker” Borgeteers can never seem to connect those dots. We saw that when districts increased taxes to make up for lost revenues to voucher schools, and they didn't even notice. Conservative voters refuse to see how they’re paying more, even after passing funding referendums.

Simply put, as the state cuts aid by 3.9%, costs continue to rise for the Eau Clair school district, like $927,000 for computer equipment delayed from last year and maintenance costs:

Eau Claire school district residents will contribute more money out of pocket … the district’s proposed 2014-15 budget would boost the amount of money collected from local taxpayers by nearly 6 percent to preserve existing services. General state aid is anticipated (to be) down $2.32 million from last year. Residents would pay $50 more per $100,000 of property value.

This increase is “the function of the revenue limit formula controlled by the state,” Superintendent Mary Ann Hardebeck said.

Walkerites will say it’s bad budgeting because anything else would burst their little fantasy bubble and force them to think. And they weren't told that "thinking" was a part of their tea party platform.
Posted by John Peterson, Democurmudgeon at 9/23/2014 12:29:00 PM