Walker cut Tech School Funding during Recession and Peak Enrollment. Restored Funding is up now and enrollment is down.

While a few areas of our state are blessed with low unemployment numbers, others aren't so lucky, and fading tech school enrollment is a sign many are just giving up. Wisconsin’s thriving manufacturing climate is now part of a bygone age, replaced by supposed “free market” global trade agreements, offshoring and an expansion of the new low wage service economy.

Who can take Republicans like Scott Walker and Paul Ryan seriously when they talk about lazy low wage people in poverty not trying, while strongly supporting businesses that wouldn't have it any other way; low wage labor dependent on taxpayer funded social safety nets equals high profits. That’s what makes the next wave of safety net cuts so cruel. Ryan’s “everybody can be rich, everybody should be a business owner” delusion is nurtured by an unquestioning media willing to treat bad ideas like real alternatives.

Declining tech school enrollment might be expected after it peaked during the Great Recession (our brainy governor cut tech school funding at the worst time), but it also might be a sign a skeptical public isn't willing to invest in retraining when jobs have become so disposable. The WPR news headline tells that story:

Wisconsin Technical Schools See 2-Year Decline In Enrollment: Drop Comes As Schools Try To Increase Number Of Students In Technical, Vocational Training - Census data shows that enrollment at technical schools around the country declined for the second year in a row.

Conor Smyth, the director of strategic partnerships for the Wisconsin Technical College System, said … over a two-year period starting in 2008 the number of full time students jumped 16 percent. As the economy improved, however, enrollment dropped by 5 percent in 2011 and a little less in 2012.

Admit it, we’re in a Service Economy Now: While Scott Walker echoes his party’s resistance to minimum wage hikes, even floating ideas to get rid of the floor completely, the low wage service sector is now a dominant part of our economy. And demand is down because people don’t have any discretionary cash.

Recently, Smyth said he met with businesses in the hospitality and tourism sector and heard similar concerns. “We have employer partners coming to us saying, ‘We need twice the number of graduates.’ In some cases, the colleges simply can't find students who are interested in getting into that program area,” said Smyth.

Here's a Journal Sentinel graph that proves my point. You'll also notice in the map to the right how two GOP targets for cuts, health care and social assistance, are the biggest growth areas. That can't be good: 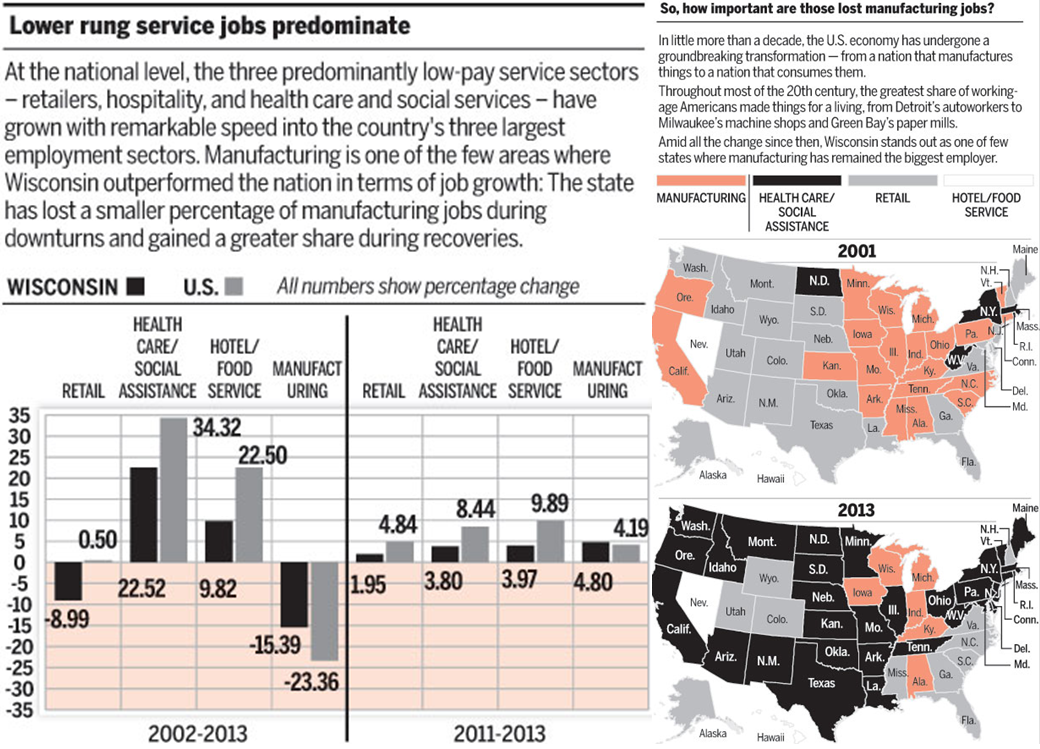