Because Scott Walker doesn't believe in raising the minimum wage, he will never act on boosting it, ever. It's his principled right wing position.

The dilemma for Walker? Will he decide to break a unique 101 year old state law requiring a living wage, or use the law to increase the minimum wage while still holding onto his principles? I predict he will not only break state law, but will challenge it in court with yet another frivolous lawsuit, where conservative activist justices will eventually side with Walker. Republicans own the courts, if you haven't noticed, and they're going to use them all the time. 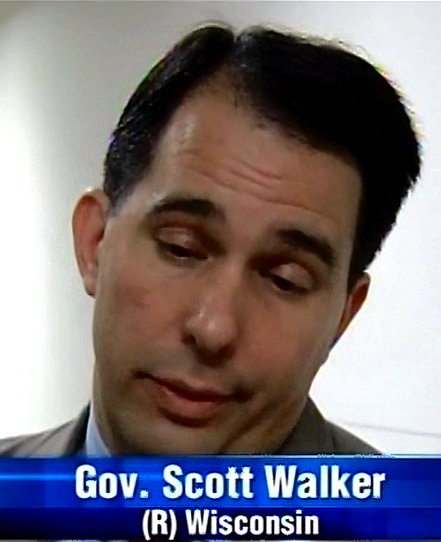 Wisconsin Jobs Now plans to present petitions from about 75 workers who say they are paid wages that are not self-supporting. The group said that violates a state law dating back to 1913 requiring that the minimum wage in the state “shall not be less than a living wage.”

Walker has said he opposes raising the minimum wage, saying it would force employers to cut jobs.

The “living wage” law requires the Department of Workforce Development ... to investigate and determine within 20 days “whether there is a reasonable cause to believe that the wage paid to any employee is not a living wage.” The law further defines a living wage as one needed to maintain “minimum comfort, decency, physical and moral well-being.”

Remember when an American value included the promise of minimum comfort, decency, physical and moral well-being? When did people say "the heck with that?"


Peter Rickman, director for Wisconsin Jobs Now’s campaign dubbed Raise Wisconsin, said “The governor and the (DWD) secretary will have to do the due diligence to decide what to raise that minimum to. The fact of the matter is, no one can live on $7.25 an hour.”