You've got to wonder if you can believe anything Republican State Sen. Paul Farrow is telling you after hearing his "confident" lie this morning on WPR's Joy Cardin Show. As usual, Farrow wasn't offered the chance to correct his confidently stated outright lie with the truth.

Here's a chart the papers have used over and over. Obviously the truth wouldn't have helped make Farrow point: 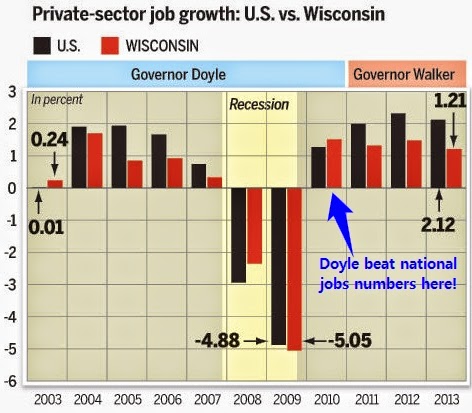 Farrow also justified Scott Walker's broken jobs promise as simply a great idea and goal to put out there. Perhaps Farrow could say the same for Obama's promise that we could keep the same doctor under ObamaCare. Let me help Farrow by changing a few words in the statement he made this morning discounting the mistake of over-promising on the jobs count:


"I don't know if it was a mistake, I think a goal of (getting to 250,000 jobs ) keeping your current doctor is a great idea to put out there. That we want a challenge to get back into the shape of things."