Walker's stand on low wages and cuts in state spending is killing consumer demand in Wisconsin.

Democrats were right again about Act 10, and the harmful effects of reducing public employee take home pay due to increases in health and pension contributions.

Add to that the massive job losses during the Great Recession, the cost of back to tech school retraining, the stagnant statewide wages...is it any wonder this is the hole we're finding ourselves in: 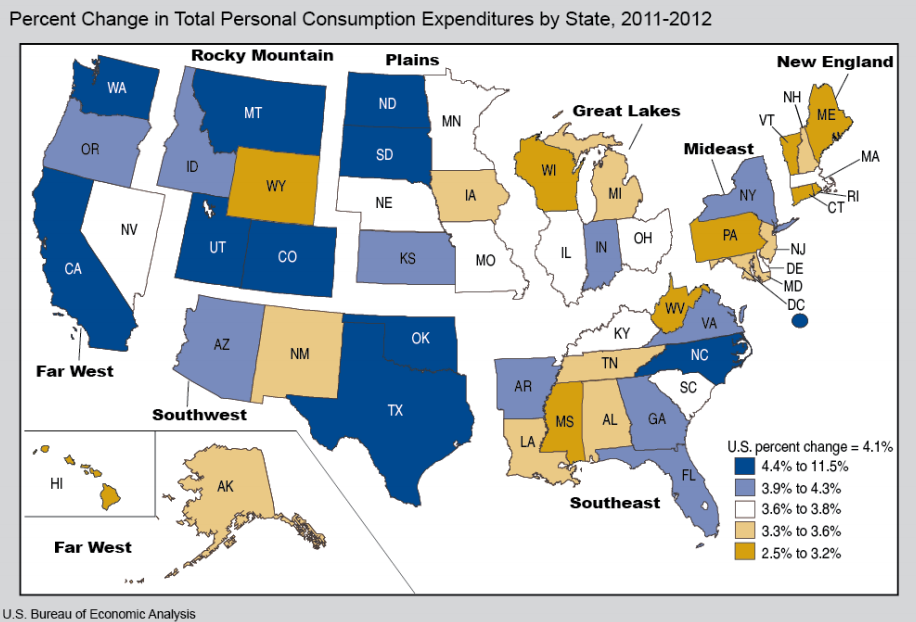 Bloomberg/AP: Wisconsin's sluggish recovery from the Great Recession was reflected Thursday in new figures that show growth in consumer spending has lagged behind neighboring states and the nation as a whole.

Consumer spending also is growing slower than personal income, which economists said could be signs that consumers feel less than optimistic about the future and may be trying to pay down debt.

Who cares, right? CEO’s are feeling outrageously optimistic according to a recent survey mentioned often by Governor Scott Walker. Consumer driven demand, which is 70% of our economy, is nothing compared to our supply side corporate bosses profit margins.

Kundan Kishor, an economist at the University of Wisconsin-Milwaukee (said), "Consumer spending is determined by the current income and what you expect income to be in the future, and if you are not optimistic about what's going to happen in the future, it will affect your consumption decisions."

Wisconsin residents' personal income grew 3.9 percent from 2011 to 2012, while it increased by 4.2 percent nationally and 4.6 percent in Minnesota.

Consumer spending also likely was affected by cuts in state spending and government jobs under Walker, along with a stagnant housing market, Kishor said. Lower government spending reduces demand for goods and services and can add to unemployment, said Steven Durlauf, a University of Wisconsin-Madison economist.

So what, says the governor, whose economic agenda is decided by what everyday people tell him:

Walker spokeswoman Laurel Patrick said spending cuts enacted under the governor were needed to address a $3.6 billion deficit. "People across the state tell him one of the best ways to fuel the economic recovery is to reduce their tax burden."

Walker is focused on bringing back our now offshored manufacturing base and laughing at the idea of mass transit alternatives favored by young adults...

Wisconsin's slower recovery also reflects long-term issues in the state economy, including a loss of manufacturing jobs and a significant portion of college graduates who leave to seek work in other states, the economists said.

Check out Jake's Economic TA Funhouse for an in-depth analysis of this report.