The news just keeps getting worse for Scott Walker. But will "stand with Walker" voters find any of this stuff out, or believe anything from the liberal media?

And wait till you see how Minnesota is doing.

Remember that weird sounding Federal Reserve Bank of Philadelphia's "Coincident index," a six month prediction of economic growth? It's back, and it looks really bad for the austerity state's run by Republicans. Like Wisconsin and Kansas. Notice liberal tax and spend Minnesota and California's spot on the chart: 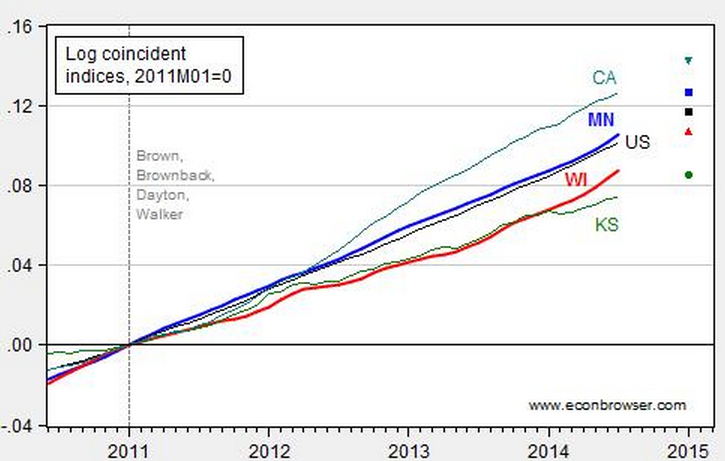 Econobrowser: Bruce Bartlett brings my attention to this article noting Minnesota’s economic performance. This reminded me to check on the Philadelphia Fed’s forecast for the next six months, released earlier today. What’s interesting to me is the fact the cumulative growth gap between Minnesota and Wisconsin (relative to 2011M01) is forecasted to grow — rather than shrink — over the next six months. For those who argue that because Minnesota fell further during the Great Recession so it should be growing faster than Wisconsin — well that’s just plain wrong. Wisconsin fell 8.3% … Minnesota fell 5.0%.

With over $2 billion in Wisconsin tax cuts, and Kansas getting rid of their state income tax, you'd  think their respective economies would skyrocket. Well supply side economics failed again.

How's Minnesota doing? The following report compared Minnesota with Michigan, not Wisconsin, and came up with a system Scott Walker just tossed into the trash heap. And that's bad for us:

A new study done for the nonpartisan think tank Michigan Future examines the policies, priorities and economies of Michigan and Minnesota. Minnesota is one of the top-ten best economies in the country; it is also a high-tax and high-spending economy.

“For so long, the accepted formula is that in order to have a healthy state economy, you have to have low taxes, low spending, and right-to-work laws,” Haglund says. “Minnesota actually has turned all of that on its head.”

There are underlying policies that Minnesotans enacted decades ago that contributed to their healthy economy. “They also have a pretty rich mix of industries,” Haglund says. “They're less dependent on one industry.

Minnesota’s per-capita income in $9,000 per-person higher than Michigan's. Unemployment is 4.7% in Minnesota. Minnesota has one of the highest percentages of adults in the labor force in the country, while Michigan has one of the lowest.

Minnesota has a progressive income tax system where those who earn more pay more. Its top income tax rate is 9.85%, and people with lower incomes pay 5.35%. Michigan has one rate of 4.25%.

The gasoline tax is nine cents a gallon higher in Minnesota, the sales tax rate is 6.85%, and local jurisdictions can add up to a percentage point on the sales tax.

Minnesota has a good education system and has led the nation in the percentage of students who are college-ready, and has the highest percentage of college graduates in the Great Lakes region.

Minnesota also has a strong social safety net. The maximum weekly benefit for the unemployed is $610 a week; in Michigan it's $362.