Believe it or not, we've been seeing the moderate side of the Koch brothers political agenda.

After looking at the Libertarian Party platform from 1980, where David Koch ran as the vice presidential candidate, it's obvious we're not dealing with mature adults with any sense of responsibility. They are adolescent bullies free to do whatever, with no supervision. To support a candidate based on a few of the ideological points below supports the passage of every point below. We would have nothing left to hold up a functioning society, or for that matter, a consumer class. It's a wonder they still live in the U.S..

Prepare to be amazed: 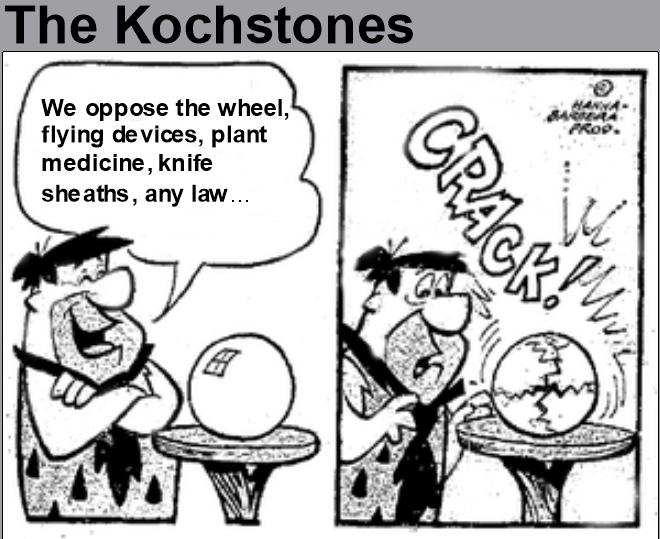 “We urge the repeal of federal campaign finance laws, and the immediate abolition of the despotic Federal Election Commission.”

“We favor the abolition of Medicare and Medicaid programs.”

“We oppose any compulsory insurance or tax-supported plan to provide health services, including those which finance abortion services.”

“We also favor the deregulation of the medical insurance industry.”

“We favor the repeal of the fraudulent, virtually bankrupt, and increasingly oppressive Social Security system. Pending that repeal, participation in Social Security should be made voluntary.”

“We propose the abolition of the governmental Postal Service. The present system, in addition to being inefficient, encourages governmental surveillance of private correspondence. Pending abolition, we call for an end to the monopoly system and for allowing free competition in all aspects of postal service.”

“We oppose all personal and corporate income taxation, including capital gains taxes.”

“We support the eventual repeal of all taxation.”

“As an interim measure, all criminal and civil sanctions against tax evasion should be terminated immediately.”

“We support repeal of all law which impede the ability of any person to find employment, such as minimum wage laws.”

“We advocate the complete separation of education and State. Government schools lead to the indoctrination of children and interfere with the free choice of individuals. Government ownership, operation, regulation, and subsidy of schools and colleges should be ended.”

“We condemn compulsory education laws … and we call for the immediate repeal of such laws.”

“We support the repeal of all taxes on the income or property of private schools, whether profit or non-profit.”

“We support the abolition of the Environmental Protection Agency.”

“We support abolition of the Department of Energy.”

“We call for the dissolution of all government agencies concerned with transportation, including the Department of Transportation.”

“We demand the return of America's railroad system to private ownership. We call for the privatization of the public roads and national highway system.”

“We specifically oppose laws requiring an individual to buy or use so-called "self-protection" equipment such as safety belts, air bags, or crash helmets.”

“We advocate the abolition of the Federal Aviation Administration.”

“We advocate the abolition of the Food and Drug Administration.”

“We support an end to all subsidies for child-bearing built into our present laws, including all welfare plans and the provision of tax-supported services for children.”

“We oppose all government welfare, relief projects, and ‘aid to the poor’ programs. All these government programs are privacy-invading, paternalistic, demeaning, and inefficient. The proper source of help for such persons is the voluntary efforts of private groups and individuals.”

“We call for the privatization of the inland waterways, and of the distribution system that brings water to industry, agriculture and households.”

“We call for the repeal of the Occupational Safety and Health Act.”

“We call for the abolition of the Consumer Product Safety Commission.”

“We support the repeal of all state usury laws.”