Maybe one of the big questions involving the now held up John Doe 2 investigation should be about the judges: Why would Reserve Judge Gregory Peterson and Judge Rudolph Randa think to stop the probe when so much evidence is pointing to possible illegal coordination between the Walker campaign and outside groups? Did they really think there was nothing there?

jsonline: Peterson and Randa — the two judges who have heard the case — concluded nothing illegal had occurred because the groups engaged in issue advocacy and did not tell people how to vote. Schmitz contended that doesn't matter and such coordination can still be illegal if the coordination with Walker's campaign was done with the intention of helping him politically.

Forget the Wisconsin Club for Growth for now, in a new revelation, that the Journal Sentinel now says has been withdrawn from the courts web site: 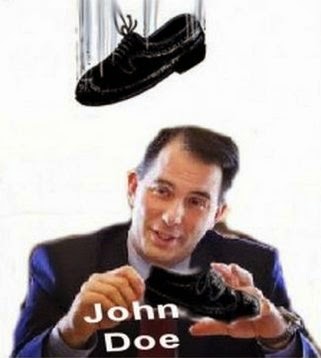 Gov. Scott Walker's campaign illegally coordinated with two national groups on political advertising in a way that went further than what had been previously known. One group mentioned in the newly available filing is an arm of the Republican Governors Association that has run ads backing Walker since 2010. The other, the Republican State Leadership Committee … Unlike the Wisconsin Club for Growth, those groups explicitly back candidates in filings with the state Government Accountability Board.

According to prosecutors, R.J. Johnson sought and received campaign strategy from an unnamed representative of the Republican State Leadership Committee. "Need to know what you are up (to) and the content of your spot. We are drafting radio to complement." Johnson wrote.

Once secret, not secret, back to secret again:

The document describing the alleged coordination between Walker's campaign and the Republican Governors Association and Republican State Leadership Committee is from a once-secret filing made in February 2014 … filing is from a trove of hundreds of pages of records that were unsealed Friday by a federal appeals court. Within hours, the documents could no longer be accessed on the court's website after some claimed the court had inadvertently made public some records that were meant to remain sealed. (The documents are available on jsonline.com.)

From Politico comes this national coverage and two of the 6 "must read passages" from the John Doe document dump that isn't getting a lot of attention here:


-“Our efforts were run by Wisconsin Club for Growth … who coordinated spending through 12 different groups.” Keith Gilkes, who managed Walker’s 2010 campaign and served as his chief of staff until leaving to manage the recall campaign wrote,“Most spending by other groups was directly funded by grants from the club,” he suggested the governor say. “Wisconsin Club for Growth raised 12 million dollars and ran a soup to nuts campaign.” The new filings explain that the main group was a conduit to transfer money to a dozen other groups. Citizens for a Strong America, for example, got $1.52 million from the Wisconsin Club for Growth. The Wisconsin Manufacturers and Commerce association got $2.5 million during the two-year period.

-“Let them know that you can accept corporate contributions and it is not reported.” The quote gets to the heart of the legal issue about whether Walker’s team tried to illegally sidestep state campaign contribution caps.