Those small government, small minded losers controlling our one party system have won.

What we’re now seeing after Scott Walker passed Act 10 is a noticeable change in the teaching profession, where dedication to our children is being slowly replaced by high turnover “employees” looking for the best monetary fit. 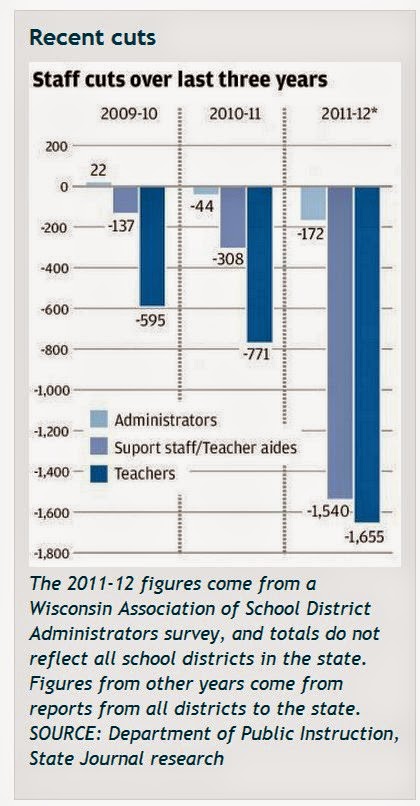 A free market based educational system will turn our dependable public schools into Dollar Store deals, where communities who once attracted relocating families due to their highly rated school districts will now be offering up well advertised private schools that could pick up and go anytime they feel they're not making enough money.

It started with Act 10. jsonline-Erin Richards:

-In the summer of 2013, hundreds of veteran teachers retired from Milwaukee Public Schools, many taking advantage of the favorable terms of expiring contracts.

-One year later … there's been another, even greater, spike in teachers leaving. But those walking away now are predominantly educators with three or fewer years of experience

-MPS officials say … "There is a national trend toward not staying with the same employer for decades."

-Some teachers get a taste of today's workplace and leave education entirely … pressures and politics of the job have heightened in recent years … it's common to hear teachers say they feel disrespected by the public, unsupported by their administration and beaten up by parents.

-Act 10 has created an open market for teachers, which makes it harder for districts to retain staff with sought-after skills. "Everyone is talking about resignation rates, they're higher everywhere in the past several years," Johnna Noll, director of instructional services at the West Allis-West Milwaukee Public Schools said.

The trend is to take the dedicated teacher out, and replace those top professionals with “salaried competitive high turnover jobs.” The following list of changes should leave you with a hollow sinking feeling. It’s a world where privateers use the word “commodity” when they talk about our kids:

-Salary structures in teacher’s union contracts once rewarded teachers for staying with the same district until retirement. But under employee handbooks, pay raises are no longer tethered to years of experience … teachers might be more easily lured away by competing districts, which now have more ability to offer rewards such as signing bonuses.

-Many districts have implemented heftier financial penalties for teachers who resign midyear. MPS teachers who sign a contract of employment for the coming school year now can face fines of up to $1,000 to $2,000 if they resign for non-catastrophic reasons. In the past, MPS teachers were not required to pay anything to resign.

Here's the best explanation why so many young teachers are leaving:

Rachel Schlueter is a 25-year veteran MPS teacher, said she had "incredible teachers" in the rooms next to her, who offered support and tips. "I think now, young people are kind of thrown into it," she said. "There's never enough time to collaborate with colleagues and to get a lot of help from other teachers. In my opinion, that's when people get frustrated and leave any district as a new teacher."