The Country Thrives under Democratic Presidents!!!

The press can play this down as much as they'd like, but is it really just an odd coincidence Democratic presidents could get this lucky every time? Didn't think so:


Voxdotcom: Economists Alan Blinder and Mark Watson assembled the evidence in their newly revised working paper, "Presidents and the US Economy: An Econometric Explanation" … they find, roughly half of the difference in growth rates can be chalked up to just three or four factors: Democratic presidents have historically been hurt less by oil shocks, and have benefited more from productivity booms, favorable international conditions, and possibly higher consumer confidence. 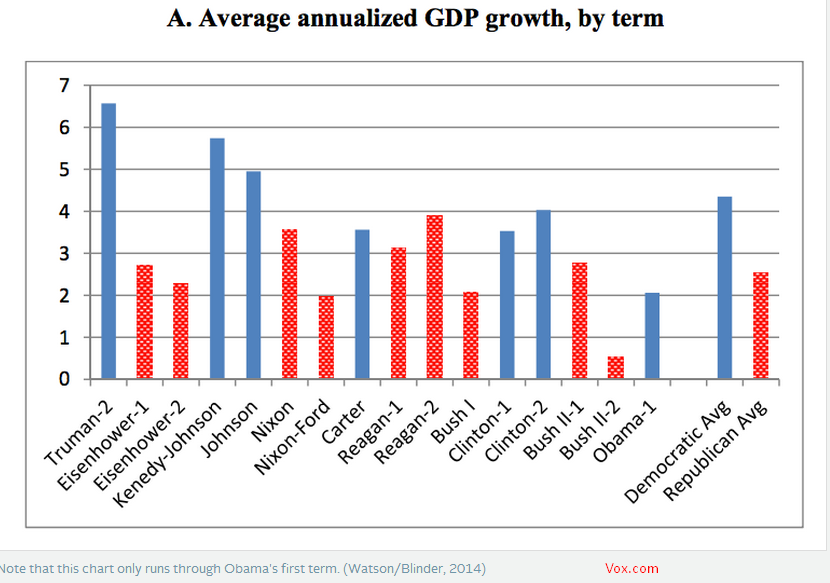 And just in case you don't read the comments sections, I had to repeat the one here where I responded: "Faced with stats that go back to Truman, and research into why, you've decided to go partisan and ignore everything. Amazing but a wonderful example of bubble world politics."


Anonymous said...By "thrive" you must mean taxed and regulated to death?

The only thing that thrives during a Democratic President is impoverishment and bureaucratic deception. Next, you'll try to convince America that Islam is a religion of peace, right? Yeah, it's for the children.