Scott Walker's official jobs count flip flop is now getting to a very ridiculous point in his reelection bid. Way back when Walker originally started losing jobs in the monthly Household Survey, he switched to the quarterly:

jsonline: Walker's office has dubbed quarterly figures based on an actual count of jobs as the "gold standard." For two years, Walker has argued against using the monthly Current Employment Statistics.

"These newest numbers are from the monthly Current Employment Statistics. They are acknowledged across the political spectrum as being less reliable than the Quarterly Census of Employment & Wages."

Even clearer was the comment below from lackey Walker mouthpiece Reggie Newson, the Secretary of Workforce Development on May 17, 2012:

WKOW's Greg Neumann just called out Scott Walker on his flip flop, comparing his previous statements to today's, a moment in television reporting you don't see enough of these days:

For "stand with Walker" low information voters, this confusing tactic by the Walker campaign will simply negate any attacks on his actual jobs record. Walker is so sure of this, he's even willing to stand behind his flip flop in his latest ad below, where he throws away the "gold standard" quarterly jobs numbers for the more inaccurate monthly Household Survey. Real balls:

Did he really say "Ellenois?" Walker really thinks Mary Burke shouldn't criticize "the Wisconsin comeback," after all, Republican recoveries are allowed to be much slower than say...President Obama's supposed "disastrous" jobs record which is twice the rate of Walker's.

I've edited together Walker's original jobs promise (Walker-"our critics say it can't be done"), with his opponent at the time Republican Mark Neumann, who couldn't have been more right about this career politician.


Walker: "Saying it can't be done, that's not something that stands in my way!" 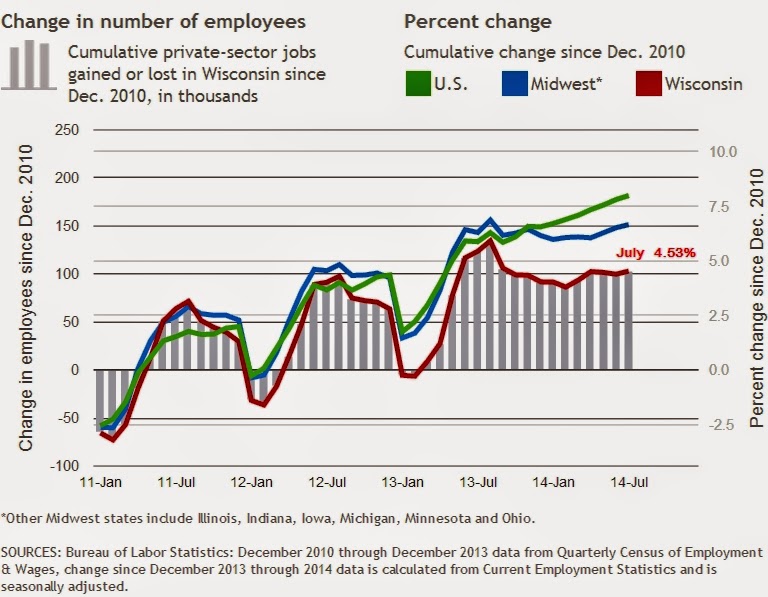