It's dangerous irresponsible behavior like this that has stalled so many bills in the Senate. In a mind boggling move, Dumb Ron Johnson put the breaks on a simple study to deal with tanker disasters. It's a tale of two approaches:

KUWS-Mike Simonson: An emergency preparedness bill that would investigate the best way for local first-responders to react to a railroad crude oil spill is on hold in Congress. The Response Act would simply form a panel to decide the best way to respond to a rail tanker incident involving North Dakota Bakken crude. Democratic Senator Tammy Baldwin says it’s needed in Wisconsin because that oil is transported across 18 counties about 45 times a week. But Baldwin says the bill was derailed at the last minute.

“Regrettably, there was an attempt to politicize the issue by adding an amendment that would approve the Keystone pipeline.”

Who wrote the Amendment? 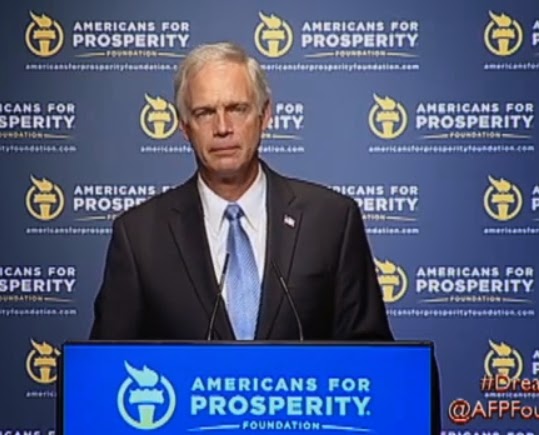 To get an idea of what this really means, and the dangerous political game Johnson doesn't even realize he's playing, check out this story reported Friday in the La Crosse Tribune:


The Canadian oil train that derailed in 2013 killing 47 people in Lac-Mégantic passed through the Coulee Region on its way to Quebec, according to Canadian safety officials. The ensuing explosions destroyed 40 buildings, and contaminated the city’s downtown as well as a nearby river and lake.

According to the report, the tank cars originated in New Town, N.D., and were hauled by Canadian Pacific through Minneapolis, Milwaukee, Chicago and Detroit on their way to Montreal … The derailment brought additional attention to the increase in rail shipments of highly flammable crude oil as production in the Bakken formation of North Dakota has soared.