Walker takes easy way out, makes federal government do all the work for him.

Nothing says freeloader or lazy more than the most recent comments by Scott Walker.

I’ve always said Republicans seek government jobs because it’s easy to freeload off taxpayers. It’s not like they’re hiding it; promising to reduce government makes their job so much easier. Heck, why work when you can rely on groups like ALEC or conservative think tanks to write the legislation for you.

Work? Not if Scott Walker can help it. Here’s the tortured logic Walker’s going to use, that by the way, runs counter to the business communities (WMC) wishes to adopt a system that works here. 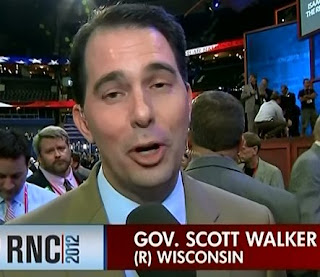 jsonline-Jason Stein: Gov. Scott Walker signaled to the national media Wednesday that Wisconsin likely won’t create its own insurance marketplace as called for under Obamacare, leaving that to the federal government.  Walker said he would prefer a state-based exchange program, but that he doubted that the federal government would allow him to shape it as he saw fit.

“I’d much prefer control at the state level,” Mr. Walker said to The New York Times, “but the problem is, I don’t think they are really state-run.”

“Why do I want to take on the potential risk to my taxpayers if I don’t really have any true authority about what’s going to happen?”

Yeah, right, that’s the reason. Business interests aren't going to like Walker's victimhood when it takes away their ability to influence the exchanges.

But according to this report from WKOW: