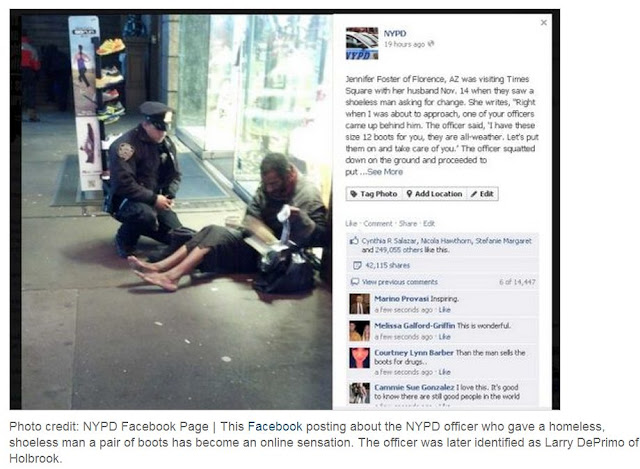 "I had two pairs of wool winter socks and combat boots, and I was cold," DePrimo, 25, said Wednesday, recalling the night of Nov. 14, when he encountered an unidentified, shoeless man on the sidewalk on Seventh Avenue near 44th Street.
DePrimo offered to get him socks and shoes.
"I never had a pair of shoes," the man replied, according to DePrimo, who's assigned to the Sixth Precinct and has been on the force nearly three years.
The officer walked to a Skechers store on 42nd Street and shelled out $75 for insulated winter boots and thermal socks. He returned to the man, knelt down and put the footwear on him.
"He smiled from ear to ear," DePrimo said. "It was like you gave him a million dollars."
The officer asked the man if he wanted a cup of coffee, but he graciously declined and went on his way.
"I didn't think anything of it," DePrimo said of his generosity.
But during dinner that night, he got a text message from a friend. The photo had gone viral.
"I was absolutely shocked," he said.
Posted by John Peterson, Democurmudgeon at 11/29/2012 10:02:00 AM