I subscribe to the Opposing Views email alert, and came across this nicely worded reason to tell corporate pirates that consumers are the real job creators, and their disdain for American workers will not be tolerated. 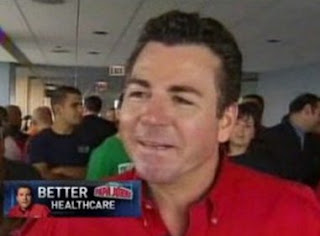 By Back 2 Stonewall: John Schnatter, the president and CEO of Papa John's Pizza, has a net worth of about $350 million and was a Romney supporter who held secret fund-raisers on his sprawling mansion grounds.

He’s also a greedy jerk who, to get around paying for Obama’s Affordable Care Act, plans on cuttingall his employee’s hours to below the mandated threshold so he doesn’t have to pay for it -- because it would cost him too much money.

How much money would it cost him exactly? About 14 cents per pizza. Yes, 14 cents per pizza is the cost of health care for his employees so they can remain healthy and be more productive. This is nothing more than corporate greed at its worst.

And, unfortunately, Papa John’s is not alone. Applebee’s, Olive Garden, and Red Lobster have all jumped on this bus. Threatening to freeze full hirings and/or reduce employees to skirt the ACA regulations.

Now, bear in mind, that Papa John’s, Applebee’s, Olive Garden, and Red Lobster are not small businesses.  Each of these companies make millions in profits each year and its workforce is among the lowest paid and hardest working in the country. And they care so little about the health and welfare of their employees that they would rather cut their already few low-paying hours than make sure that they are taken care of.

Now, this is America and they have the right to do with their businesses what they want, no matter how scummy it is. A loss of business, any loss of business, will hurt them greatly and, in Papa John’s case, will cost him much more than 14 cents per pizza in the end.

It's time for the people of America to stand up against these corporate misers who think that their workforce is nothing. I for one will not be eating at any of these places from this moment forward.  And I would ask the same of you also until they state that they will not reduce their workforce and hours. This is America and as Americans it's time that we start standing up for our fellow countrymen and begin to teach BIG BUSINESS that they are nothing without us.