In just another demonstration of how the conservative mind works, I found these three amazing examples that will shock the senses. Voter fraud goes well beyond the attempts to suppress voter turnout. After reading the following stories, you'll begin to understand how paranoia is a fever that influence every move and every waking thought of the conservative mind. It's makes you wonder how they even manage to function at all: 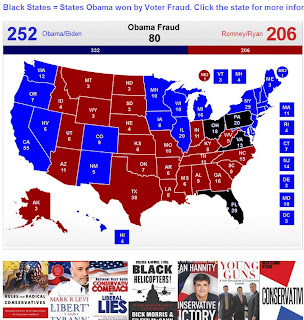 Examiner's Dean Chambers caused quite a stir when he talked about polls being skewed for Obama … Chambers is focused on the reason for Obama's victory. The Blaze reported that Chambers' new site,barackofraudo.com, shows that Obama received 80 electoral votes in four states due largely to voter fraud. "Some circumstantial evidence is very strong, as when you find a trout in the milk," the site says, quoting Henry David Thoreau. "Evidence of vote fraud is very much like that," Chambers wrote on the site. "Such is true of the voting divisions where Obama gets 100 percent of the votes cast. As if anyone REALLY believes that is legitimate."

Chambers admits, however, that right now there is a lot of noise with very little substance. "Things like the 59 voting divisions of Philadelphia where Romney received zero votes," Chambers said. "Even Larry Sabato said that should be looked into."

WND: A forensic profiler whose previous cases have included the Natalie Holloway and the O.J. Simpson double murder says Barack Obama is confessing to stealing the 2012 president election.

“Obama appears to unconsciously confess on multiple occasions that in his secret fury he stole the 2012 presidential election – continuing his attacks on our nation,” Andrew G. Hodges, M.D., told WND in an assessment of Obama.

“But really that is no different whatsoever than in 2008 becoming an illegal president who violated the Constitution. He uses a unique psycholinguistic technique he calls “ThoughtPrint Decoding” to “read between the lines” … Before his anxious and relieved supporters, Obama spoke of his pride in his daughters but commented, ‘But I will say this for now, one dog’s probably enough’ – on the surface referring back to promising his daughters a puppy after his 2008 victory,” Hodges said. “Read his confession that America has just elected a dog of a president – and once was enough,” Hodges said.

It may take more than a year before seven Montgomery County residents indicted for allegedly committing voter fraud wind up in court. The indictments stem from the May 8, 2010, election of The Woodlands Road Utility District No. 1. Ten individuals listed their voter registration address as that of a hotel in order to take control of the RUD board.

Looks like Republicans are looking at the wrong ethnic and income group for VOTER FRAUD.