Let’s face it, Republicans have a blind spot when it comes to the power and corrupting nature of money in politics. Heck, the conservative Supreme Court justices couldn't grasp the concept, and they’re part of the intellectual elite legislating from the bench.

So in the most blatant admission yet that money amplifies “free speech,” long time partisan pundit Brent Bozell is now threatening to withhold money from GOP campaigns if they compromise and raise taxes on the wealthy. 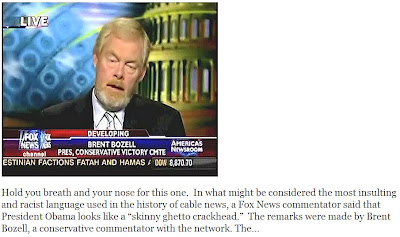 Bozell also sent letters to House Speaker John Boehner and Senate Republican Leader Mitch McConnell earlier in the week, pushing them to reject Obama’s call to raise taxes on the wealthy. “…both sides are making opening gambits and the talk so far is alarming,” Bozell wrote.

Bozell thinks the minority party, should be in power, and that money trumps the will of the people. Simple message, isn't it?
Posted by John Peterson, Democurmudgeon at 11/29/2012 10:47:00 AM