After the last twelve years of slow job growth and dramatically lower tax revenues, we've heard from Republicans that this is no time to raise taxes; in fact it’s an economic killer.  Struggling families can ill afford any kind of tax increase, especially now.


They might be taking that back. GOP star Chris Christie is telling devastated homeless families that they’re about to get hit again, this time with tax increases.

Kind of flies in the face of Republican talking points: 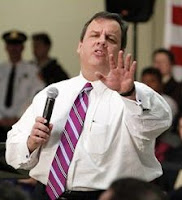 CBS: New Jersey Gov. Chris Christie is warning residents in storm-damaged towns that their property taxes are likely to rise. Christie says storm-related costs that aren't reimbursed by FEMA will likely be passed along to taxpayers. "It's got to be paid for," Christie said, according NJ.com. "This goes back to the old magic money tree. There's no magic money tree." The governor says residents in hard-hit towns will help rebuild their towns by paying higher taxes.