Dear Lord, help Murray Energy’s Laid off workers get used to being “takers” who “outvoted the Producers.”

The founding fathers fought to free corporate people from the taxes of the king…or Obama in this case.


So why has the Lord forsaken business interests, like Murray Energy in the presidential election?
Murray Energy laid off 163 workers.

WestSideStory:  Chief Executive Officer Robert Murray read a prayer to workers that asked God’s forgiveness for the decisions that the company was forced to make to preserve the very existence of enterprises that God has helped them build. He did this during a conference call. the company’s CEO read a prayer. Here’s the complete text: 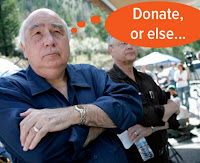 We are a Country in favor of redistribution, national weakness and reduced standard of living and lower and lower levels of personal freedom.

My regret, Lord, is that our young people, including those in my own family, never will know what America was like or might have been. They will pay the price in their reduced standard of living and, most especially, reduced freedom.

The takers outvoted the producers.

Lord, please forgive me and anyone with me in Murray Energy Corp. for the decisions that we are now forced to make to preserve the very existence of any of the enterprises that you have helped us build. We ask for your guidance in this drastic time with the drastic decisions that will be made to have any hope of our survival as an American business enterprise.

That employers can dismiss workers on a whim, on the basis of speculation, for the sake of retribution, or to make a political point, is simply wrong. When businesses don’t like the decisions we make democratically, they withdraw the resources we need to work and thrive, often shipping them abroad, until they get their way.