Everybody Around Walker mixed Campaigning with Government...so is he innocent?

Scott Walker disregarded the rules when he was county executive, and now as governor. Let’s face it, Republicans can disregard any rule they want with a little nicely crafted double speak. And their voters love it.

Even though Walker hasn't been charged, yet, he was mentioned as being part of a group that illegally mixed campaigning official government business. 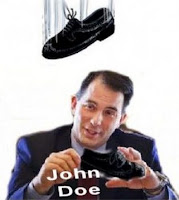 According jsonline’s Steve Schultz: Gov. Scott Walker and his top campaign and Milwaukee County aides were implicated Monday in a scheme in which they routinely commingled political and official county business.

Kelly M. Rindfleisch, 44, was sentenced by Judge David Hansher to six months in jail and three years’ probation for a single felony count of misconduct in office. But the judge stayed the sentence pending Rindfleisch's appeal to the state Appeals Court or the state Supreme Court.

Supreme Court? Really? I wish we all had a chance to appeal to the state’s top court, don’t you?