While Media Trackers manufactures phony outrage over false premises, there are other conservatives  who are bent out of shape over Obama's plan to carry out Agenda 21, a mind control technique from the cold war and a plot device used on I Spy and Man from U.N.C.L.E..

I couldn't resist the insanity contained in the paranoid corners of the conservative mind: 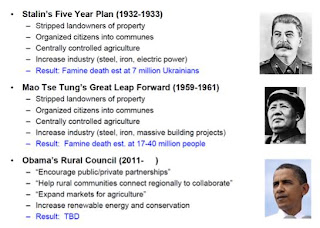 resident Obama is using a Cold War-era mind-control technique known as "Delphi" to coerce Americans into accepting his plan for a United Nations-run communist dictatorship in which suburbanites will be forcibly relocated to cities. That's according to a four-hour briefing delivered to Republican state senators at the Georgia state Capitol last month.

The event—captured on tape by a member of the Athens-based watchdog Better Georgia (who was removed from the room after 52 minutes)—had been billed as an information session on Agenda 21 ... a nefarious plot that includes forcibly relocating non-urban-dwellers and prescribing mandatory contraception as a means of curbing population growth.

The invitation explained: "How pleasant sounding names are fostering a Socialist plan to change the way we live, eat, learn, and communicate to 'save the earth.'" About 23 minutes into the briefing, Searcy explained how President Obama, aided by liberal organizations like the Center for American Progress and business groups like local chambers of commerce, are secretly using mind-control techniques to push their plan for forcible relocation on the gullible public:

Check out the picture to the above right:

How perilous is the situation? Here's a slide from the presentation comparing Obama's record to that of Mao and Stalin.