UPDATE: It looks like the lukewarm admission that Scott Walker might be guilty of campaigning on public time has some of the liberal blogs mad as hell. While we as bloggers have the ability to pretty much assume Walker is guilty, as would any mature adult, reporters are constrained by the facts. The Milwaukee DA doesn't appear to have enough evidence yet to bring charges, and isn't that the problem? But blaming the reporters for digging up the details? Isn't that what we want from the media? Lashing out at Dan Bice and others basically reduces our credibility, and suggests we're just as bad as the right wingers. Personally, I know we're better than Charlie Sykes, Belling and McKenna.

A strange thing is happening. Parts of the conservative media are finally catching on, calling into question Scott Walker's judgment and participation in campaign work on taxpayer time...and dime.

But you'd never know Walker had any problem at all from conservative radio talkers, who never seem to hold Republicans feet to the fire on any questionable activity. It's almost as if they don't want to ruin their ability to get Republican lawmakers as guests on their shows. They fear being cut off, a technique Republicans have been expanding as a way of avoiding the real media. With friendly interviews and softball questions, they don't have to disclose their real intentions. 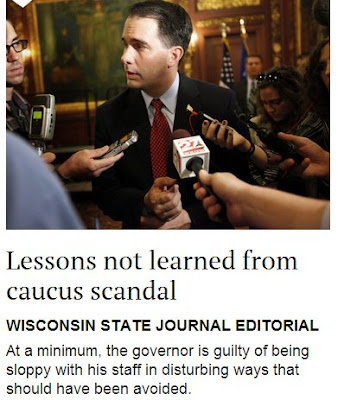 "Disturbing ways?" Bravo. And this is a piece yesterday from their conservative columnist Chris Rickert, who also noticed what's been obvious to "liberals" for some time:

Prosecutors had just laid out evidence that Walker knew Rindfleisch was on the taxpayer's time when she worked on behalf of former state Rep. Brett Davis' campaign … You could almost hear the wave of euphoria breaking over the state's Democrats … I ran into a lot of "no comments" and "I don't knows" when I asked attorneys, the Government Accountability Board and others whether behavior like Walker's is illegal.

Rindfleisch's attorney, Franklyn Gimbel, said if an elected official "facilitated" someone else's illegal behavior, he could be considered party to a crime.

Mike McCabe, head of the Wisconsin Democracy Campaign said, "What's not clear yet is whether the DA's office has evidence that Walker himself committed crimes, or just had knowledge of his subordinates breaking the law."

Charged or not, though, Walker hardly seems blameless. It might be that Rindfleisch and Walker spent a lot of their time cheating taxpayers. But only Rindfleisch ends up doing any time.