You would think “they have to be kidding?” Voters are now getting a real look at an empowered Walker Authority ready to show Wisconsinites what a conservative dictatorship looks like.

9 members of the legislature want to arrest federal employees charged with implementing the health care exchanges.

Just a note to voters; so you we’re tired of all the recalls? Well welcome to the government you deserve. Here come the "assi-nine." 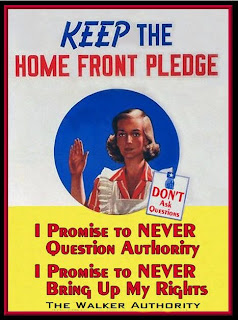 jsonline-Patrick Marley: Nine members of (Walker’s) own party, who will serve in the Legislature for the next two years … say they back a bill to arrest any federal officials who try to implement the health care law.

Eight of the nine Republicans also have gone on record saying they also want to write a law that would see Transportation Security Administration agents charged with sexual assault if they conduct pat-downs of passengers going through airport security.

That’s not all folks…oh, you say you never heard any of this during their campaigns? Like the Romney/Ryan campaign, you don’t need to know:

All nine also told a tea party-aligned group they backed passing so-called "right-to-work" legislation; allowing people to carry guns without having to get permits from the state; allowing people to buy raw, or unpasteurized, milk; and blocking state funding for the federal Real ID law that requires states to develop more secure driver's licenses.

And just in case you might have heard “the public spoke with their vote,” that only applies if you’re a Republican:

Rep. Chris Kapenga (R-Delafield) told the Campaign for Liberty he believes the health care law is unconstitutional, despite the U.S. Supreme Court's ruling that the passes constitutional muster. "Just because Obama was re-elected does not mean he's above the constitution," he said.

Of course when you have government lawmakers who don’t obey laws they don’t like there’s not much point in taking seriously anything the constitution has to say either.

This opens up a number of possibilities for those who don’t like Act 10. In fact, pick the law you don’t like. Oh, I forgot, we’re not part of the elite Republican Walker Authority, so these new rules don't apply to us.

In addition to Kapenga, those listed as supporting the Campaign for Liberty's positions are Sen. Mary Lazich of New Berlin; Reps. Don Pridemore of Hartford; Erik Severson of Star Prairie; Tom Larson of Colfax; Scott Krug of Wisconsin Rapids; and three Republicans elected for the first time last week who will be sworn in early next year - Rob Hutton of Brookfield, Mark Born of Beaver Dam and Dave Murphy of Greenville. Severson told the group he did not support the legislation on TSA pat-downs.