Conservative Constituents not listening to the politicians elected by the people.

The voters have spoken?

We hear that a lot in Wisconsin, especially now after the Republicans successfully gerrymandered the districts to increase their majority, even though that would have never happened without the redistricting. But forget about the overwhelming vote for Obama and Baldwin. That didn’t matter as much, or was just inconvenient. 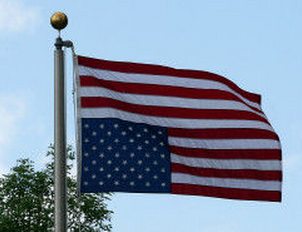 Journal Times: Distressed by the results of the election and direction of the county, one Racine man has put his politics on public display. Slowly twisting in the wind outside of Dennis Montey’s home at 939 Marquette St. is the American flag, hung upside down. “For starters, hanging the flag upside down is an international sign of distress,” Montey said. “The reason I have our flag flipped is because our country is broke, we are losing our liberties one inch at a time and our politicians are not listening to their constituents.”

Oh, but they have listened, and reelected Obama big time in the state with 7 percent margin, and voted for Tammy Baldwin instead of tea party loudmouth Tommy Thompson. They listened, but not to the loony right.


Montey said Sunday that he intends to leave it that way until “the country gets going in the right direction,” adding, “I’m hoping it won’t be four years” … Montey, who describes himself as a conservative-libertarian, said he voted for Republican Mitt Romney.