Only gun loving paranoids would put together, and think, the following Facebook site satisfied a need. I'm just guessing, but due to the inclusion of Obama in one of the pictures, what we have his is another fine example of Republican American Exceptionalism. 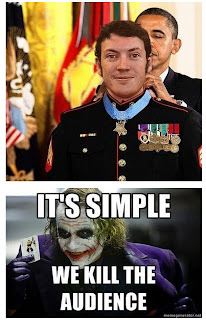 Only hours after the Aurora shooting claimed 12 lives early Friday morning, an individual took to Facebook and created a page in dedication to alleged shooter James Holmes.

Despite lots of anger and criticism directed towards the page's yet-to-be-identified creator or creators via the comments, more than 425 people have already Liked the page as of Monday morning.

Responding to angry comments, the person responded "It's a page for those who like James, give him a second chance."