Selling off our country one piece of "commons" at a time.

Here's another editorial from Thom Hartmann  pointing out how governmental privatization looks, and how the profiteers are using disaster capitalism to take ownership of our countries. Always remember, the banks caused the economic disaster, not working people or their safety nets. 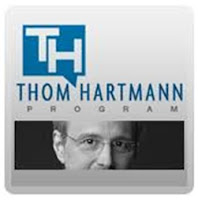 Corporations are eating our commons: So-called Emergency Financial Managers in Michigan are selling off public schools to private charter school corporations - and laying off hundreds of public school teachers in the process. The "mini-dictators" who - appointed by Republican Governors - have unprecedented power to fire local elected officials, break union contracts, and sell off our commons to corporate interests have decided to eat alive the public school system in West Michigan and around the Detroit area. Study after study has shown that private, charter schools don't produce any better education results, but they do pay teachers less, have higher teacher turnovers, and - making Republicans happy - are union-free.

Meanwhile, across the pond in Greece, the rich are devouring the commons at a record rate. Greece's new coalition government is trying to speed up the sale of state-owned assets including utility companies, airports and railways, and 28 other state properties. Far left SYRIZA Party leader - Alexis Tsipras - who was left out of the coalition government, blasted the privatization plans, arguing that the move was like putting a giant "for sale sign" on his country and that the, "government will have to account for its actions, the looting of public goods."

It doesn't matter where in the world you are, the Libertarian one-world ideology of billionaires running nations into the ground while impoverishing the working class is on the move.

Here's Naomi Klein with a little more on disaster capitalism: