After a Great Recession, the "willingness to 'unbuild' state Government...has never been done before."

At a time when wages and family buying power have declined, energy and health care costs have increased, and jobs have been shipped overseas, it’s hard to imagine a way of climbing out of this mess anytime soon. If you’re doing alright now, it won’t be long before you’re affected too.

Making things worse, the public blames Obama instead of congress. Change for change sake is the disgruntled voter’s mantra. The following report only substantiates the idea things are going to get a lot worse. 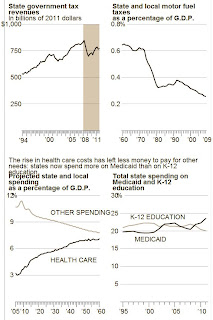 NY Times; The fiscal crisis for states will persist long after the economy rebounds as they confront rising health care costs, underfunded pensions, ignored infrastructure needs, eroding revenues and expected federal budget cuts, according to a report issued by a task force of respected budget experts. The problems facing states are often masked by lax budget laws and opaque accounting practices, according to the report, an independent analysis of six large states released by the State Budget Crisis Task Force. “The ability of the states to meet their obligations to public employees, to creditors and most critically to the education and well-being of their citizens is threatened,” warned the chairmen of the task force, Richard Ravitch, a former lieutenant governor of New York, and Paul A. Volcker, a former chairman of the Federal Reserve.

The problem; Republican cuts to spending, services and government.

“This is a fundamental shift in the way governments have responded to recessions and appears to signal a willingness to ‘unbuild’ state government in a way that has not been done before,” it said, If federal grants to the states were cut by just 10 percent, the report said, the loss to state and local government budgets would be more than $60 billion a year … Things are worse than they appear, the report contends.

And it's not like we didn't see health care costs going through the roof for at least the previous decade.

Even before the recession, Medicaid spending was growing faster than state revenues, and the downturn led to higher caseloads, making the program the biggest share of state spending, as states have cut aid to schools and universities.

Desperate budget officials often see public pension funds as an almost irresistible pool of money. As a result, the report found that from 2007 to 2011, state and local governments shortchanged their pension plans by more than $50 billion — an amount that has nothing to do with the market losses of 2008, which caused even more harm.