Wisconsin State Journal columnist and conservative Chris Rickert looked the idiot a few days ago, when he came out against the idea of landlords passing out voter registration forms with their lease information and disclosures (as required by law). The harm? Rickert list a few that numbs the mind.


As a general rule … most college-age folks aren't quite as keen on voting, and I guess that's why we continue to see similarly nice, if misguided, get-out-the-youth-vote gestures such as the one from Madison Ald. Bridget Maniaci … (who) said increasing voter turnout would be one benefit of her proposal to require landlords to give tenants voter registration forms when they move in.

If you’re like me I had to read the above line over again, just to confirm Rickert really wrote what I thought he wrote. It’s now “misguided” to encourage the youth vote, because after all, they’re not "keen" on it. Assuming all new tenants are students is also pure lunacy.

But I found the next line the most telling, especially for someone like me who lived through a time when corporate citizenship and responsibility used to extend to their local communities in a big way. 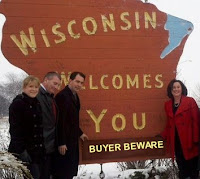 That’s right, city councils are all nonpartisan, devoid of politics. If that wasn’t bad enough, Rickert assumes everyone renting must be a liberal.

And finally, maybe Rickert can correct me on this one too; I thought WE were the government, and helping US be better consumers really isn't such a bad outcome. Or should our new state slogan read, “Buyer Beware?”
Posted by John Peterson, Democurmudgeon at 7/14/2012 11:51:00 AM