Will Walker's Crony Capitalism and Lying turn Conservative Voters Off? Dream on.

Lies, lies and more lies from the Walker administration's denial, but expansion of crony capitalism. 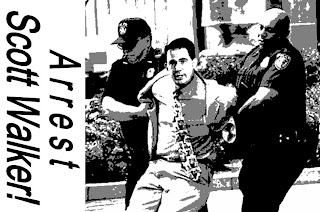 Newly released records show a Stevens Point company accepted an offer of tax breaks contingent on it winning a state contract, appearing to contradict earlier claims from Gov. Scott Walker's administration that no firm commitment had been made to the company.


WSJ: Documents provided to The Associated Press show the chief executive officer of information systems company Skyward signed an acceptance of the $11.7 million tax break offer on March 26, four days after it was proposed.

In a June 19 email, DOA spokeswoman Jocelyn Webster described the so-called "soft offer" this way: "To be clear, Skyward did not receive any firm commitment, monetary awards, or tax incentives from WEDC." The documents provided to AP show the company had accepted the offer.


Skyward has threatened to leave the state if it doesn't get the contract.

And as I reported some time back:

WEDC leader Paul Jadin has stood by the Skyward offer, saying he believed it was legal because his agency isn't bound by procurement laws that forbid bid-rigging.


There aren't many people willing to stand behind bid-rigging. Rep. Paul Ryan bashes crony capitalism in his reelection campaign, but it's standard operating procedure in Wisconsin:

Republican Rep. Robin Vos said he thinks WEDC has been doing a "wonderful job" and concerns … were overblown. "I don't even think it was that big of a deal," he said. It's possible that Skyward will still get the state contract.


Ya thing? Corporate welfare continues to drain the public coffers:

Skyward employs about 270 people statewide … sells management software to track grades, attendance and other information for schools and serves 220 of Wisconsin's 424 districts. The tax breaks offered were to help Skyward with a planned $20 million expansion of its headquarters and the hiring of more than 600 workers.