We're still waiting for those surveyed by Wisconsin Manufacturers and Commerce who were chomping at the bit to start hiring.


But you know, the whole country is going through a time of very slow jobs growth, so...that leaves Gov. Scott Walker off the hook? 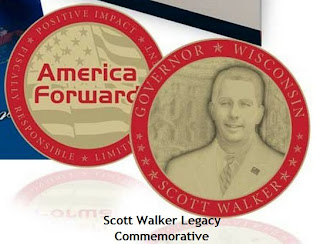 Not so fast. Scott Walker said over and over during his recall campaign that businesses have never been more upbeat, promising that once the recall was over, and Walker won, economic certainty would be established and employers would start a hiring frenzy. Walker won...so where are the jobs?

These genius business owners and excited “job creators” didn’t need demand for their product or service, they needed certainty and Gov. Scott Walker in their corner.

Welcome to the new phase of Walker excuses. First the bad news, and lousy trend lines for Walker:

jsonline: Wisconsin lost an estimated 11,700 private-sector jobs in June and the unemployment rate climbed to 7% from 6.8% in May. June's private-sector job losses were the deepest in 11 months. The report shows losses (and a) slew of layoff announcements in recent days: the iPacesetters Inc. call center in Eau Claire; the Stark and Roth investment firm in St. Francis; Provimi Foods Inc. meat processors in Seymour, and the SNE Enterprises vinyl window and door manufacturer in Mosinee all announced deep jobs cuts this month. In northern Wisconsin Thursday, the Marshfield Clinic announced it would cut 119 jobs.

In the government sector, Wisconsin lost an estimated 1,500 jobs, led mainly by cutbacks in cities, counties and public schools. Net losses in both the government and private sectors led to an overall decrease of 13,200 total non-farm jobs last month.

So what happened to the overwhelming optimism by business owners once Walker got his job back? 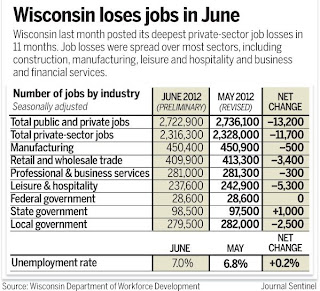 "These numbers are not a surprise," said Cullen Werwie, spokesman for Gov. Scott Walker. He noted that the national jobs numbers for June also were weak. Rich Meeusen, chief executive of Badger Meter Inc., a metro Milwaukee manufacturer said, "With all the uncertainty, it's very risky for a manufacturing company, which tends to hire for the long term, to make those commitments."

My gut feeling is that there will never be a perfect moment, a “certain” time, to hire, expand, create, be optimistic, innovate or take chances. Is that the way to run a business? No. The only thing they really want out of all of this?

One party rule. I know, that's an odd conclusion and one that doesn't seem remotely related, but that's my determination after talking to and listening to many of my conservative friends.
Posted by John Peterson, Democurmudgeon at 7/20/2012 12:34:00 PM