Lunatic fringe conservative radio host Mark Levin, along with his gang at the brownshirted Landmark Legal Foundation, filed a complaint in Wisconsin against judges who signed the Walker recall petition.

Funny thing, they're located in Virginia, yet feel obligated to meddle in another states legal rights and issues. That's so Republican. I guess our Mordor like out-of-state authoritarian overseers weren't happy seeing our judges sign Walker recall petitions, a right they will apparently maintain. 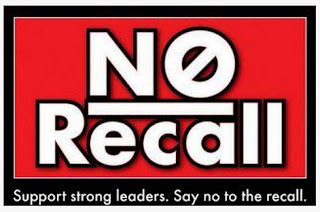 Reuters: Wisconsin state judges who were among nearly a million residents who signed petitions that triggered an unsuccessful recall election against Republican Governor Scott Walker did not breach their judicial obligations, a state ethics panel has found. The Wisconsin Judicial Commission concluded the judges "had not otherwise acted in a manner that would reflect adversely on ... impartiality or the appearance of impartiality," according to a brief letter to the judges on June 26.

The rights within a democratic republican need to change, according to the likes of subversives like Levin.

Levin asked in a letter to the commission that a "full range of sanctions be considered for these egregious ethical violations, including as appropriate reprimand, censure, suspension and removal. According to Landmark, at least 29 judges signed petitions calling for the recall of Walker

Levin's crack legal team must have missed the Judicial Code below:


The Wisconsin Code of Judicial Conduct: "Although the rule contemplates the continuance of nonpartisanship on the part of Wisconsin judges and those seeking judicial office, judges are not expected to lead lives of seclusion," the code also says.