Republican State Sen. Glenn Grothman on Voter ID: "I think...people who cheat are more likely to vote against us." 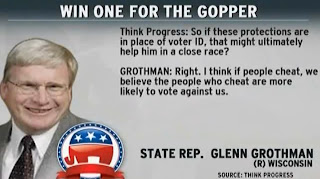 There should be enough evidence by now, showing dozens of cocky Republicans bragging about how voter ID laws will help them win elections, to make a case against any and all such laws nationwide.

But Grothman doesn't seem to care anymore, and his unfiltered rants...what can you say, but thank you: