Poor Rep. Sean Duffy, life ain't much better collecting a taxpayer paycheck. Thankfully, voters were generous this time allowing Duffy to buy a car with their money...or were they? 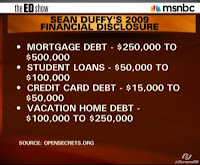 Think Progress: Though they campaigned on a platform of reducing the deficit and ridding wasteful spending, more than a half-dozen Tea Party congressmen have collectively spent over $100,000 in taxpayer money on personal vehicles. ThinkProgress examined spending records for the 112th Congress and found seven GOP freshmen …(including our own) Sean Duffy (R-WI)...Duffy’s “ride” cost taxpayers: $24,525.00