I love it. With power comes great irresponsibility. Kansas has decided to adopt the Ryan plan of free market action. Forget the warning from Moddy's, or the state budget office, ideological faith is infallible. This is going to be good. 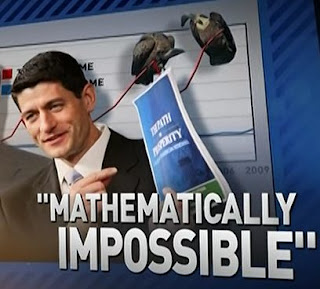 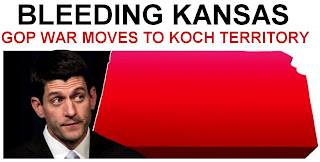 Reuters: Fiscal conservatives in Kansas have turned their state into a laboratory to test reforms similar to the "Ryan plan" for massive tax cuts at the national level -- and the result has been a Republican civil war. Backers argue they will create jobs and boost the economy to partially offset lost revenue, with budget cuts solving the remaining shortfall. The tax cuts go into effect in January.

The Kansas Legislative Research Department calculates the lost revenue will amount to the equivalent of 36 percent of the state budget within five years.

Republican Governor Sam Brownback has described the reforms as a "real live experiment" that proponents want to see implemented at the national level.

Moderate Republicans argue that a tax-cut-fueled boom is a pipe dream and lost tax revenue will devastate schools, roads and basic services for the poor, as well as lead to the release of convicted felons.

"Brownback has been an extremely aggressive governor," said Edward Flentje, a Wichita State University politics professor. "No governor in recent times has taken on as many issues."

The law removed the top state income-tax bracket and lowered the remaining two, as well as making some businesses, including limited liability companies, tax exempt.

"Whatever you want to call it, it's the Ryan plan," said University of Kansas's Loomis. "This is based on pure faith in supply side economics."

According to a Kansas Legislative Research Department analysis, in fiscal year 2018 (beginning July 2017) the revenue loss would exceed $900 million and the cumulative hole from previous years in the projected $6.8 billion state budget would amount to nearly $2.5 billion. A June 14 Moody's Investors Service report said tax revenue losses would be "dramatic," adding that "inaction or the use of unsustainable budgetary measures to offset the loss could lead to a (rating) downgrade."

"The influence of Koch Industries is felt daily in this state," said Republican Senate President Steve Morris … other moderate Republicans claim that the powerful Kansas Chamber of Commerce is a "puppet" of the Koch brothers. The chamber has rejected that claim outright.