Uniformity, Certainty, Predictability and Job Creation, Mining Industry wants to take away your land and health!!!

Remember when mining interests and the Walker Republican authority presented us with this reason for passing their industry written legislation: “provide certainty and predictability that encourages investment and job creation.”

That’s the catchall phrase for just about all deregulation now. On the subject of mining, check out the most jaw dropping law yet passed by Pennsylvania Republicans in February that basically handed the energy industry complete control over that states local communities: 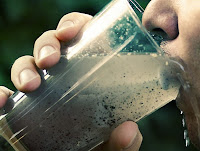 Act 13 "was a complete overreach," said attorney Jordan Yaeger … The municipalities involved sit above the Marcellus Shale, one of the largest natural gas deposits in the nation. Accessing the natural gas involves "fracking." "It keeps Pennsylvania from becoming a free-for-all," he said.

What excuses were offered up by mining interests and the energy industry? This may sound familiar for those familiar with our own problematic state mining bill:

Natural gas industry officials and advocates of drilling in the Marcellus Shale are in favor of the law because they want uniformity in rules governing where they can drill. "The premise for the General Assembly's action earlier this year was to provide certainty and predictability that encourages investment and job creation across the commonwealth," Marcellus Shale Coalition President Kathryn Klaber said in a prepared statement.

Despite finding hazardous substances, specifically arsenic, barium or manganese in well water at five homes at levels that could present a health concern, the EPA determined that the levels of contaminants present would not require additional action by the agency.

For freedom loving, free market voting Americans, you can always move somewhere else.
Posted by John Peterson, Democurmudgeon at 7/31/2012 10:36:00 AM