This is what we have seen from the Democrats for years, and apparently, for the foreseeable future as well. Tim Cullen pulled his power play to be the go to guy for both sides. And just when that fragile balance in the senate was so critical...god the Democrats are such losers. I’m ashamed.

Good riddance Cullen, as Democratic voters, we need to elect real advocates of our party, and not Republican lightweights. Stamp your feet and whine, you’ll fit right in the Grothman's and Vos'. 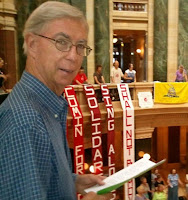 Democrats just gained control of the Senate 17-16 with Sen. John Lehman's victory over Van Wanggaard in a recall. It's unclear immediately what the implications are of Cullen's announcement.

Cullen, who was among the 14 Democratic senators who left the state during the historic protests at the Capitol in 2011 but had sought compromise with GOP governor Scott Walker on collective bargaining, said he was insulted by not being named chairman of any Senate committees after the Democrats regain control of that chamber.


"He's always been a 'Democrat' voice that is more about his district and delivering for his constituents than just marching to the tune of specifically the left wing of the 'Democrat' Party."

The DEMOCRATIC Party is entirely "left wing." not just part of it, like this sick son-of-a-butch likes to throw in our face every chance he gets. Check it out: