Red Alert Politics (I didn't make that name up I swear) reported on Lt. Gov. Rebecca Kleefisch's recent appearance at the Smart Girl Summit in Alexandria, Virginia (see pic below and its funders), where she declared that "big special interest money" lost to America's "moms" in the Walker recall win. Really? The amazing comment was such a amazingly blatant lie. It's the same one repeated by Scott Walker and the state Republican authority.

Are you ready for this:

Wisconsin Lieutenant Governor Rebecca Kleefisch, who won her recall election, was proud to say she was part of the “movement of moms across the country willing to fight like cats for their kids.”

Sure it's outrageous and insulting, but that's Rebecca Kleefisch. Kleefisch is actually bragging about all that outside money trying to influence our state policy. But "moms" fighting the big bad teachers unions? Not even close. Check out how much "non-special interests money" came in from all the deep red states and Friends of Scott Walker. From all those moms...? 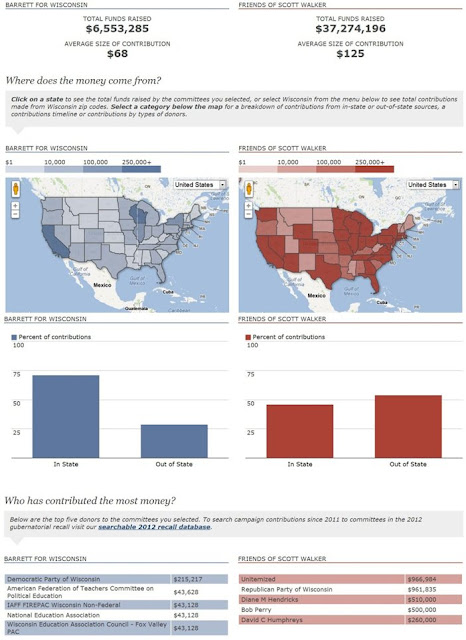 The Walker administration isn't letting up; the propaganda machine is steering Republicans away from the idea that corporate PAC's and wealthy billionaire contributions is anything but "special interest money" Don't laugh, it's working:


Kleefisch, the closing speaker for this weekend’s Smart Girl Summit and who was greeted with a standing ovation, declared ... people came together to help the “epic battle that was being waged in Wisconsin between the big special interest groups and your average working family.” “It surprises me that anyone can afford to give a campaign a cent. But… some things are so important that we’re willing to get squeezed a little bit…We do what it takes to make the future brighter for our kids.”

Average working families were so taken by Scott Walker's cause...

Squeezed average working families? How will the following ever again make ends meet...