Republicans continue to get picked on needlessly. Nothing they ever do wrong, or at least punishable. Their virtuous pursuits cannot be questioned, no matter how it looks, no matter who they harm.
Check out the latest “victim” of a malicious and vindictive system of justice: 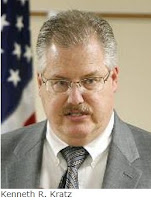 jsonline: Kenneth Kratz is not going quietly into the lawyer disci­pline night. The disgraced former Calu­met County district attorney lashed back Thursday at the Office of Lawyer Regulation … Racy text messages Kratz sent to a domestic violence victim … numerous contacts with women connected or ex­posed to his work in various ways amounted to exhibiting “offensive personality,” a vio­lation of licensed lawyers’ Rules of Professional Con­duct.

Kratz says it should be dismissed … or reviewed by an outside panel … He denies exhibiting “offen­sive personality,” a violation he characterized as an overly vague catchall. He accuses the OLR of act­ing in a malicious and vindic­tive manner, noting that it has not tried to learn who leaked the records of the initial inves­tigation. Disclosing the confi­dential records itself is a sanc­tionable offense, Kratz wrote.

That’s right, it’s the fault of the person who leaked the records. Drat! Kratz got found out. Kratz continues the victim act:

Furthermore, Kratz argued, the OLR’s request for a six­ month suspension, instead of a public reprimand, reveals a punitive and not corrective motive. Kratz has never been disciplined in 25 years of prac­tice.

The first four counts of the complaint re­late to Kratz’s texts to the do­mestic violence victim. Other counts of the com­plaint involve Kratz’s interac­tions with three other women, none of whom, he argues, ever filed grievances with the OLR and therefore should not be brought into the matter — where they could be subjected to embarrassing cross exami­nation — without their con­sent.

Another woman, who went on CNN about her claim that Kratz sent her sexually sug­gestive texts after supporting her clemency request, simply lied, Kratz says in the filing. Kratz resigned in October 2010 after then-Gov. Jim Doyle began procedures to remove Kratz from office. A referee will hear argu­ments in the disciplinary ac­tion later.

Labels: Lawyer
Email ThisBlogThis!Share to TwitterShare to FacebookShare to Pinterest