Walker’s State of the State will include ONE BIG LIE, among many others. News media allowed it to happen.

UPDATE: 4:05 pm-I just got an except of exactly what I've been talking about below: the BS line the Great Recession's job losses have anything to do with Walker's predecessor Gov. Doyle. Yes, it's driving me crazy!!!! 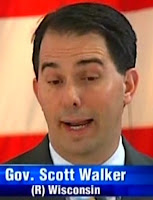 "When I addressed you in this chamber last January, Wisconsin had suffered through three years of 150,000 of our fellow citizens losing their jobs. The unemployment rate was 7.5%.  And after years of tax increases and budget tricks, Wisconsin faced one of the largest budget deficits in the country.

Now, our unemployment rate is down from a year ago.  In fact, it's the lowest it’s been since 2008.  We are turning things around.  We are heading in the right direction. During the past year, we added thousands of new jobs.”


Here's what I predicted:
Gov. Scott Walker will lie tonight, and get away with it for at least a few days, if not weeks. The first lie is that he created the jobs in the first 6 months of his administration. Business doesn’t create jobs that quickly, meaning those jobs were created under the Doyle administration. When Walker’ policies were passed, poof! No jobs. The second lie encompasses the three years that includes the Great Recession. Gov. Doyle’s fault? Walker will say it was.

jsonline: Walker spokesman Cullen Werwie said in an email, “He'll discuss the problems the administration inherited, what was done to address them, and the foundation the state now has for the future.”

This lie has been repeated over and over, but not corrected by the news media. And that's why Walker will get away with telling that lie again tonight, because he now knows he can:

WSJ: Assembly Speaker Jeff Fitzgerald, R-Horicon, touted the same report as proof that their leadership is working. "Wisconsin's unemployment rate dropped to 7.1 percent last month, and 21,400 more people have jobs in Wisconsin than a year ago," noted Sen. Fitzgerald. "Facts are facts. In the past year, our job numbers are up and unemployment is down," he said. "We just had our first year of job growth after three straight years of decline."

“Three straight years of decline?” In the last eleven months of the Doyle administration, 12,000 jobs were created. If you include the year of the Great Recession, which Sen. Fitzgerald is doing, yeah, I guess you could say jobs were lost overall. But that would by ignoring the job creation trend Doyle started, and that lasted into June of 2011. Walker will make the same claim.