Business Tax Climate in Wisconsin Slips under Walker. It's Working?

I'm not an economist, so instead of getting it wildly wrong, I've posted the picture and chart showing the state business tax rankings for 2012. Oddly, with all the tax cuts and giveaways to Walker's corporate pay masters in 2011, Wisconsin lost ground in business favorability. What a mess.

Did any of this have anything to do with taxes going up on low income wage earners, or the biggest cuts to education in the nation? Or why we're seeing six straight months of job losses which almost negated any job creation numbers? And this is what Republican voters are cheering Scott Walker for?

Wisconsin is one of the 10 worst states in terms of taxes on businesses, according to the State Business Tax Climate Index released from the Tax Foundation. It rates Wisconsin 43, down from 41 a year ago. Illinois moved most dramatically in its Index rank over the past year, falling twelve places (from 16th place in 2011 to 28th place in 2012). 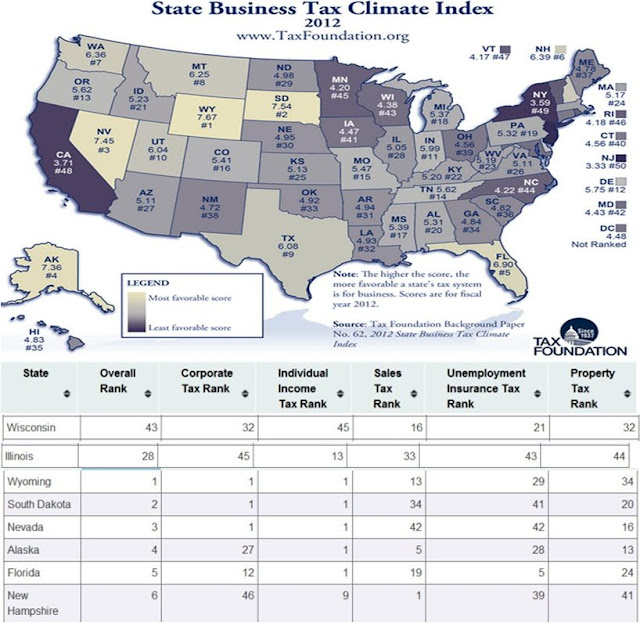 What all this means in the bigger picture, after seeing all the cuts in state spending so far...who knows. But if I had to take a guess, I would say we're just starting to see the public service cuts under Walker, and a major shift in the state livability index. Forget Wisconsin, we're really in Fitzwalkerstan.

It is obvious that the absence of a major tax is a dominant factor in vaulting many of these 10 states to the top of the rankings. Property taxes and unemployment insurance taxes are levied in every state, but there are several states that do without one or more of the major taxes: the corporate tax, the individual income tax, or the sales tax. Wyoming, Nevada and South Dakota have no corporate or individual income tax; Alaska has no individual income or state-level sales tax; Florida has no individual income tax; and New Hampshire and Montana have no sales tax. The lesson is simple: a state that raises sufficient revenue without one of the major taxes will, all things being equal, have an advantage over those states that levy every tax in the state tax collector’s arsenal.