Tommy Thompson Bashes Unions after once saying "The relationship between labor and management...is harmonious...through collective bargaining."

It's the OMG moment for Tommy Thompson in the race for Sen. Herb Kohl's seat. Flip flop would be putting it mildly. This is just part of the story you can find here: 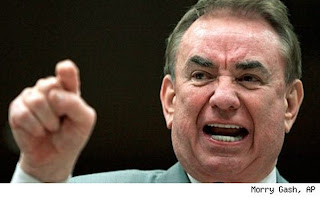 josonline-Dan Bice: Sometimes it's hard to figure out who the real Tommy Thompson is. There's the Thompson who chided state employee unions this month for complaining about Gov. Scott Walker's proposals to increase the amount worker’s pay for pensions and health care.

"He says to the unions and the bosses, 'We're going to ask you to help.' Oh, isn't that tough? Awwww," Thompson said sarcastically at the Walker rally on Jan. 21. "We're going to say we would like you to pay 5% of your retirement. Now you tell me what's wrong with that. And you tell me, is that a crime? And then (Walker) had the audacity to say, 'We are going to ask you to pay 12% for your health care.' Isn't that sad?"

Red meat for the red-state crowd.

But then there's the Thompson whom he and his campaign would hope conservatives forget - the four-term governor who gave a speech to Puerto Rico lawmakers (in 1997) touting collective bargaining laws in his home state.

"The relationship between labor and management in the public and private sector (in Wisconsin) is harmonious, due in part to the ongoing ability to communicate and solve problems through the collective bargaining process. In respect to state government, Wisconsin has collectively bargained with state employees for 25 years. By working together, we've created a positive atmosphere for state employees and enhanced services to our citizens (and) ensuring excellence in delivering services to our citizens," Thompson said, according to the transcript. "Our efforts have cumulated in Wisconsin's ranking as one of the most powerful economies in America for seven consecutive years."

Union leaders were trying to organize employees in Puerto Rico's government at that time. Marty Beil, head of AFSCME, said he asked Thompson to insert a plug for public employee collective bargaining in the speech.  "We sent him some ideas, which ended up in the speech then." So AFSCME officials helped write that portion of Thompson's talk? "Correct," said Beil, who was present for the 1997 speech in San Juan. "He did it at our request."

You’ll love this surreal response from the Thompson campaign:

Thompson's campaign officials said Sunday they see nothing inconsistent between his 1997 speech and his current support for Walker's agenda. Spokesman Darrin Schmitz in an email (said) "…the Qualified Economic Offer and other cost controls led to protests as well, so it's absurd to say Thompson's support of Gov. Walker's reforms is inconsistent with how he governed."

Beil isn't buying it … in 1998 - a year after the speech in San Juan - the state workers union threw its support behind the incumbent over his Democratic foe. Beil described their relationship as "close."