Lori Compas did the impossible, in a red district, by getting the needed signatures to recall the biggest authoritarian bully in the legislature. Hey, maybe know one likes him. 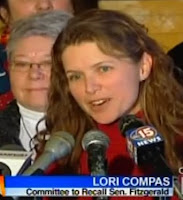 jsonline; Recall organizers filed 20,600 signatures Tuesday to force a recall election against state Senate Majority Leader Scott Fitzgerald - the first of what is expected to be six filings against Republicans including Gov. Scott Walker. The signatures filed by the group trying to recall Fitzgerald amounted to 123% of the 16,742 valid signatures that would be needed to force a recall election. Fitzgerald had no immediate comment Tuesday, saying his campaign would release one later in the day.

Organizer Lori Compas said Friday she would not be a candidate, but on Monday she held out the possibility she might.

"A lot of people have been asking me that - I have no idea," she said when asked if she would run. "If no other suitable candidate can be found, I guess I would be open to this."