The battle is almost over, and the days of public education are nearing an end. Vilification of teachers was their first success, portraying them as over paid and tools of their union bosses.

The second success was selling charter and voucher schools as an improvement over public education. You’ve heard it before, “parents know what’s best for their kids.” They do, except when it comes to the complex world of education reform, research on improved curriculum and teaching techniques.

Like the lazy freeloaders they are, Republicans would rather run from the hard work of education reform, to the easier solution of dumping the problem into the hands of profiteers.  The private sector will then be able to “market” their “success” like the latest new and improved abs reducer, with manipulated data and no transparency.

The following is just one story nationwide that shows a gullible public, running from the hard work of improving their schools, to sending their kids to different buildings with private educators whose failures are even more dramatic than our public schools.  I've highlighted the marketing BS: 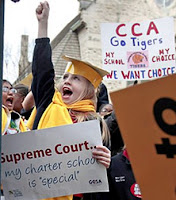 EdWeek: More Than 1,500 Rally for Ga. School Choice: More than 1,500 students, teachers, parents and advocates of school choice stormed the Georgia Capitol on Wednesday, telling lawmakers that the state's children deserve educational options … supporters marked National School Choice Week. Similar events were held across the country. Rashaun Holliman, a former principal and activist for the Center for an Educated Georgia, told the crowd that while there are great public schools in Georgia, there are also great alternatives.

Republican Senate Majority Leader Chip Rogers said, "Education is the great equalizer, if you have an education, you can succeed. School choice equals freedom."

John Trainor, a father of three whose children attend a charter school in Fulton County, said "Unlike every other political issue, school choice doesn't see politics, it doesn't see race, it doesn't see gender. All it sees is the success of our children."

Oh but it is all about politics. And "all it sees is" a profit. Good luck with the mob mentality of education reform…so sad.
Posted by John Peterson, Democurmudgeon at 1/27/2012 11:24:00 AM