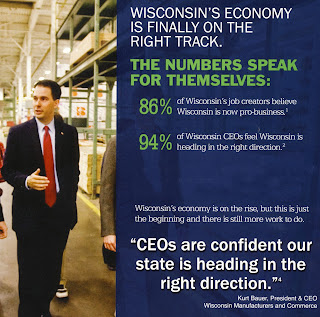 So far, I've received 5 card stock advertisements from the Republican Party of Wisconsin pushing Walker's successes. For the GOP, "Keep moving Wisconsin Forward" is a Humpty Dumptyism. Maybe no one will notice. Of course Republicans are playing up the myth of job creation, even though its really their biggest Achilles heal.

This is like the voucher argument, on steroids; never reveal the numbers, just tell people how good other people feel about (fill-in the blank). Vouchers are failing miserably under actual scrutiny, and the same is happening with Walker's jobs plan. See the misleading advertisement to the right. "Job creators "believe" Wisconsin is pro business now. Wow, doesn't create jobs, but they're believers. That's good enough for conservative voters. "CEO's feel" were going in the right direction. "Feeling" doesn't feed a family. Funny thing, with all the money Walker is milking from outside donors, none of the direct mail pieces are paid for by his campaign. 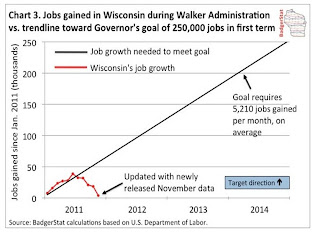 So are we on the right track? Check out the amazing graphic on right, the flip side of the GOP ad. Is that a phallic symbol?