So Drilling more Oil in the U.S., and adding it to the World Market, will do what...?

...for the last 7 years or so, we've seen the old myth "supply and demand" disproved, smashed, trashed, dashed to smithereens, over and over again. So I thought this headline in the conservative Wisconsin State Journal was so revealing and so pathetically clueless. Drill baby drill? 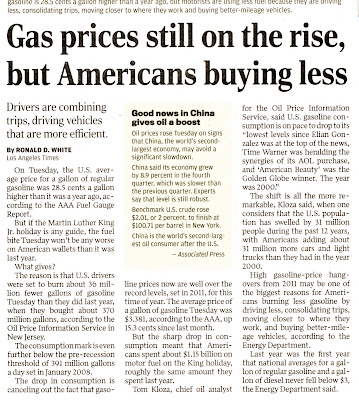 Some aren't convinced that we've seen the death of supply and demand when it comes to gas prices. But I'm sticking with it. I've been watching this for years, mostly due to articles that have been written about the very problem. But Keystone XL is always brought up in the discussion. Here's a Washington Post article disputing some of the myths and sky is falling whining from House Republicans:

The pipeline would have reduced U.S. reliance on oil from the Middle East U.S. vulnerability to turmoil in the Middle East is linked to how much oil we consume, not where we buy it from. The price of oil is set on world markets: When convulsions in Libya sent the price of crude up 30 percent last year, prices for Canadian heavy oil (similar to what is produced from oil sands) rose by nearly 55 percent.

If we don’t build the pipeline and buy their oil, the Canadians will sell it to China.

So what? World oil prices depend on how much oil is produced — not who sells what to whom. Whether the United States or China buys oil at the world price from Canada or Brazil or Saudi Arabia or Nigeria won’t affect U.S. economic fortunes. Some argue that buying oil from Canada rather than elsewhere would shrink the yawning U.S. trade deficit, since Canadians are more likely than others to spend their petro-profits in the United States. But Canada gets richer no matter whether it sells its oil to American or Chinese consumers, and its newfound wealth spills over to the U.S. economy regardless.


The fate of the Keystone XL pipeline will be of limited consequence to either long-term U.S. energy security or climate change