Amazing wasn't it? Gov. Mitch Daniels gave the SOTU response like a undertaker.

The GOP picked Daniels for the response so he could eventually enter the presidential race . Daniels' job was to talk down the economic recovery. Daniels defended the favoritism afforded the rich through the tax code, calling any fair adjustment an “effort to divide us.” Protect the rich, or we’ll all be in “danger.” 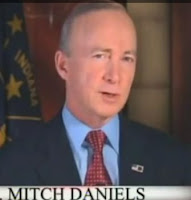 WaPo: “On these evenings, presidents naturally seek to find the sunny side of our national condition. But when President Obama claims that the state of our union is anything but grave, he must know in his heart that this is not true. No feature of the Obama presidency has been sadder than its constant efforts to divide us, to curry favor with some Americans by castigating others. As in previous moments of national danger, we Americans are all in the same boat.”

The GOP defiantly defends the wealthy, pushing the idea that most Americans envy the rich, and wish they too could be just as loaded. Is that why Warren Buffet’s secretary is…a secretary? No. Is that why teachers become…teachers? Is that why a small businessman is happy with just making a living, raising a family, and taking a vacation from time to time instead of becoming a nationally syndicated chain?

We don’t all strive to be millionaires and billionaires. Surprise! But Daniels doesn’t get it:

Here's an ad Rachel Maddow featured on here show highlighting the doom and gloom of Daniels:


We can dream can’t we? Herman Cain continued the fear mongering. (keep in mind, we got here via Republican policy)

“We know that this nation is broke,” Cain said. “Not almost broke, it is broke and Washington is broken.” Obama’s health-care law must be repealed “because it was forced down our throats to begin with,” Cain said. “We heard more class warfare, where the president and his administration still want to manipulate the tax code, and pick winners and losers.”

Hasn't the tax code already been manipulated to pick winners…like the wealthy? I guess they don’t want government picking different winners and losers.

Rep. Eric Cantor’s stone faced demeanors during the Obama address was a signal to conservative voters not to listen. But Cantor is also under the impression we all envy the rich and want to be just like them.

“You know, I care about Warren Buffett’s secretary,” said Cantor on CBS’s “This Morning.” “I want her to do well. I want her to do better, just as I think everybody in this country should have an opportunity to achieve and pursue their dreams.”

Rubio also doesn’t want to pit the rich against the middle class, because, it’s so unfair to the rich.

Sen. Marco Rubio (R-Fla.) said Wednesday that he has never seen a president “pit Americans against each other” like the current president.

Here's a little piece from Rachel Maddow on Mitch Daniels. Daniels by the way saw nothing wrong with the Bush tax cuts, and laughed at the idea the Clinton surplus' were in danger.  I'm paraphrasing: "We'll have surplus' as far as the eye can see."