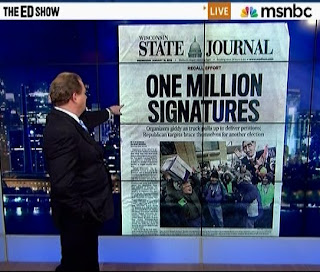 Madison, despite being considered one of the most desirable cities in the country to live and work, is despised by Republicans. Even today, they’re still telling the rest of the world to stay away.

Having said that, I thought this press release comment by Friends of Scott Walker was telling (highlights my emphasis):

Falk's record as Dane County executive falls in lockstep with a Madison liberal ideology that is far outside the mainstream of the majority of Wisconsinites."

Is that true? Less than a quarter of Wisconsinites voted for Scott Walker. How can conservatives make the claim that he reflects the will of the majority? He defeated his opponent by a slim margin too.

Check out this Friends of Scott Walker statement about Falk’s announcement to run for governor. It’s almost comical how they threw in almost every right wing cliché they could think of. You would think their voters would be catching by this time:

"Kathleen Falk's announcement today comes as no surprise, as we have long anticipated she would be the nominee hand-picked by big-government, public employee union bosses.

Scott Walker, the hand-picked corporate lackey (remember the signs "I am AFP?), Scott Walker, apparently forgot his own failed run for governor in 2006:

The strong emphasis by Walker on “hand-picked by big government, public employee union bosses,” is a dead giveaway their record so far stinks, and the voters will see that. And a correction; unions are not “big government” anything. Writing laws that destroy unions is big government.

Note: I found this reminder of Walker's record on his Wikipedia page:

He cut the number of county employees by more than 20 percent, and reduced the county's debt by ten percent. However, according to the Associated Press, "overall county spending ... increased 35 percent over his tenure".[15]